Roche Lake – Ice Off, Fish On 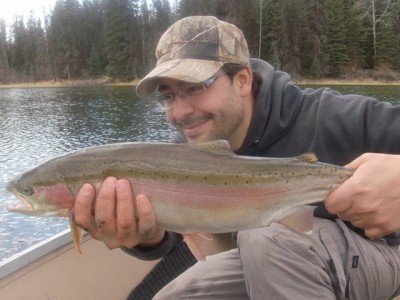 Well with the ice just recently off Roche lake, and despite the weatherman ‘s prediction of rain, we decided that today was the day to give it a go … and we’re sure glad we did! 😀

Oh and what a surprise … the weatherman was wrong again! 😕

We arrived at the lake about 9:30 AM and as usual spent the first 20 minutes or so exploring the lake for moving fish and indications of feeding sources and activity. And again, as usual for this time of year, we didn’t observe any hatches but did see a few fish rolling in the shallows. So quietly stalking into casting range of our prey we geared up with the meat & potatoes and began to methodically work the area.

Now I’d like to be able to tell you that we started hammering fish right away but that just didn’t happen. In fact, the fishing sucked and with the water at 43 Fahrenheit and dirty we were just about to conclude that the lake must be in full turnover … and that’s when Benny’s line went off! A short fight, a quick throat sample and a gentle release later we were examining the contents of the unwilling participants last meal: 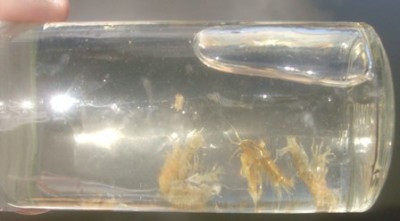 …not the best picture but them’s shrimp in the tummy!

OK so the good news was that now we knew what they were feeding on and the even better news was that they were decent sized Gammarus shrimp and not the tiny hyella species that are almost impossible to imitate. So a quick pattern change and the lines were back out with the both of us eagerly anticipating the next strike. So we waited …. and we waited …. and for the next hour or so the fishing still sucked!!! 🙁

Oh well, sometimes even when you think you are doing everything right the fish decide not to cooperate. So just like before we began discussing packing up and heading out and this time my line goes off! Another short fight, a quick throat sample and a gentle release but this time there’s more than just shrimp in the sample! On go the chironies, out go the lines and on goes the fishing! 😀 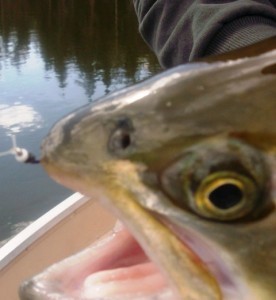 Another Roche lake lunker on a chironomid!

The fly of the day ended up being a size 14 “little boy blue” chironomid pupa tied on a Togen Scud hook and topped with a Togen 3/32 white metal bead. Stay tuned as we will be demoing this particular fly in our Togen hooks & beads review very soon.

All in all we were into about a dozen fish with the biggest weighing in right around the 4 pound mark.

The peak of the hatch occurred at around 2 PM  in about 10 feet of water  and all of the fish were typical Roche lake feisty silver bullets that put up great fights and entertained us with some tremendous aerial acrobatics!

So that’s fishing folks! Just when you think you’ve got it all figured out the fishies throw you a curve ball, and other times when you think it’s all over but the crying the fishing turns on like a light switch!  This time however it all worked out with a beautiful sunny day on world renowned Roche lake fishing the infamous hard fighting Kamloops Rainbow trout! What more could a guy ask for!  😀 And it’s only gunna get better folks so get out there and get fishing!

* If you’re interested in a fishing vacation in the BC Interior you really need to check out the Roche Lake Resort – luxury chalets, restaurant, and BIG hard fighting Kamloops Rainbow trout!

4 Responses to Roche Lake – Ice Off, Fish On