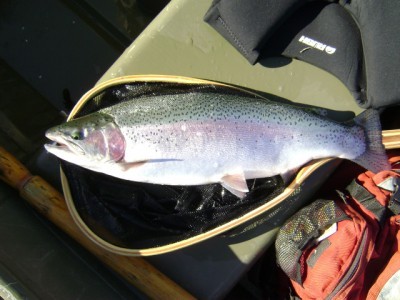 ... you got to love Kamloops in the spring!

As it became apparent that ice off wasn’t going to happen up here before our plant turnaround, Steve and I went pro-active. We loaded up his truck, hit the Alaska Highway, turned left and were on our way. A quick up and over the Rockies then down the Rocky Mountain trench and 11.5 hours later we dumped out at Corporate Headquarters in Kamloops … FlyGuys stomping grounds!

My buddy Don from Vernon met us the next morning and after stocking up we headed up to the lake. After setting up fish camp we got the boats in the water and were wildly excited about the challenge of a new(to us) lake. It was shortly after that the snow squalls started rolling over the ridge! There was only one other guy in a boat fishing the lake and when we talked to him he said the ice had come off fully just a couple days earlier …  a bit late for this 3000 foot lake but that’s the way the timing went. He mentioned that he wasn’t having much luck so we began by touring around exploring and looking for some sign of fish in and around the weeds. Unfortunately we saw none so strapped on the sinkers and began to troll around – I had pretty good luck with a super sink tip floating line and a cactus muddler with all fish around 12 inches.

The next morning we woke to a heavy frost and clear sky’s. The weather picked up and so did the fishing. Still no luck indicator fishing whether shallow or deep. There was nothing hatching and in talking with a couple of the other boats on the lake trolling they weren’t picking up many fish on their electronics either. We did alright and caught a bunch of fish, biggest being around 5 lbs, so we were happy. Don kept a couple and when he cleaned them they had nothing but a little mush an d a couple of tiny shrimp in them. They just hadn’t turned on yet possible due to the water temperature and lack of hatches. 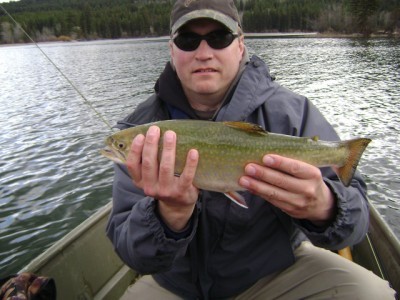 ... and another little piglet

On our final morning we saw a bunch of swallows working a shallow bay across from the boat launch. Steve and I zipped over and set anchor and sure enough chironomids (size 22) were coming off the water. We were rigging chironomids and mini leeches but before we even set our indicators to depth 6 loons moved in and surrounded the boat. Even 45 minutes after they left the fish didn’t come back.

All in all we had a great time, caught some fish including some nice ones but worked hard to get them. The three most productive flies were:

We’ll be back next year probably a few weeks later and then maybe I can use some of the 10 dozen chironomids I tied! I’d also like to thank Rob for all he did to set up our trip. You’re the man. I’ve got lots of pictures to look at for the next 6 weeks until I can fish next and lot’s of time to dream about our next Kamloops fishing trip!