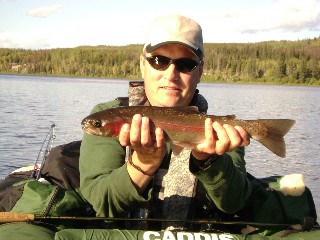 Mid September and it was time to try Pete Lake, figuring the algae bloom would have died down. The day before Steve and I went was 30C and that’s about as hot as it gets in these parts. Strange summer/fall!

We were able to find a new quad trail to the lake and were able to avoid the 1/2 km slog through swamp with all our float tube gear. That and the fact the wind wasn’t howling pretty much made the day right off the bat! I’ve fished this lake 6 times and the longest I’ve lasted on the lake before being blown off was half a day. Too emphasize that point while 4X4 in we noticed a new Wind Turbine farm on the next ridge over.

Didn’t have a thermometer with us but the water felt pretty cool on the waders. There was still a lot of green algae spheres suspended throughout the water column but not bad at all. This lake requires, as do most lakes with poor visibility, flies with flash and sparkle.

The morning was spent throwing everything we had at the fish with not much luck. Floating, sink, slimelines, trolling, casting and indicators and the only fish were two 15 inch rainbows on a wine gold bead micro leech in 10 feet of water under an indicator.

As I prepared to troll in for lunch I looked through a bunch of fly boxes seeking something I hadn’t tried that would catch my eye. And there they were…two mustard coloured ’52 Buicks half buried in the corner of one of my lake boxes. They had a wide silver tinsel rib and the sun hitting it made them stand out. I tied one on and kicked across the bay to our launch point. About half way across I got a bump,then a little later a tap and just before the underwater weeds near shore a good hit. I was going to stop and cast but my bladder submerged in cold water had it’s own agenda and so into shore for lunch.

After lunch I kicked out just past the weeds, cast out into the lake hooking a fish but losing her. I was using an intermediate cameo line with the ’52 Buick and the second cast produced an 18 inch fish to the tube. 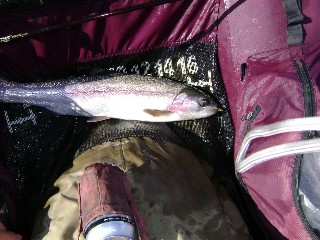 For and hour the Buick was red linin’ right up until a nice rainbow thrashed at the tube and left with it in her upper lip.

It was a good afternoon with us both catching fish from 16 to 20 inches. I guess the one thing driven home, when it comes to flies , is sometimes the old classics became classics because they work.

And speaking of driving home, on the way out we decided to try a short cut we were told about. A little bit of a risky move as we had less than half a tank of fuel. All part of the adventure right? 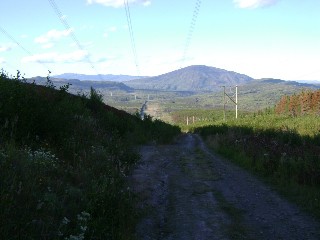 Although it cut off a lot of highway km’s I’m sure it took us just as long. We found the trail that led to the powerline then took it back to a secondary road and on to the highway. As with all the trails and back roads in the area, after all this year’s rain, there were washouts and one missing bridge. We made it through though and it was nice not to encounter all the logging trucks we saw on the ride in. With most people in full hunting mode we’re looking forward to having the lakes more to ourselves and enjoying some good fall fishing! 😀