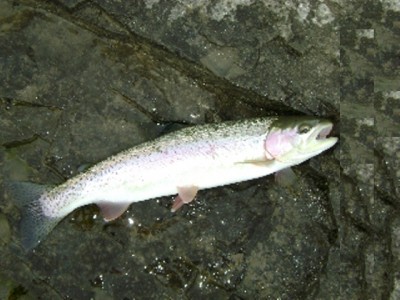 It was late Wednesday evening when the wife leaned in and whispered those seven magical words ….. “I’ve got a hankering for some rainbow!”  Well that snapped me out of my semi-comatose state! There’s nothing like a pre-ordained, spousal approved fishing trip! 😀

Usually when I want a feed of rainbow I go to one of three places … Williston Lake, Dinosaur Lake or the Peace River. All three maintain a cool temperature all year round and the rainbows are sweet and tasty. Most rainbows from the lakes in this area have varying degrees of muddy/algae taste that doesn’t bother some but you never get that out of the Peace system. With the weather calling for winds gusting to 60 km on Friday plans got simplified down to the Peace River.

The river’s been running really high the last month or so and rumor has it  that Hydro is doing so to prevent having to spill any Williston water. I was curious to try a few places that could be productive with this extra water flow. I hiked down to the first spot and things looked perfect. Some serious white water was passing a flat rock ledge and  there was a big back eddy with a depth of around 10 ft. 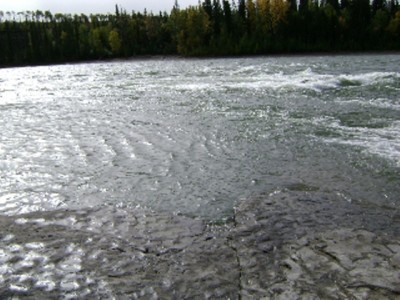 White water on the Peace!

As usual I rigged up two rods, a floating line to drift nymphs and a super sink tip with a Double Bunny. I was expecting action right off the get go but after 40 minutes of drifting all kinds of nymphs through the seam and the back eddy my enthusiasm was waning. I kept thinking there’s got to be a Bull in here scaring the other fish away. The switch was made to the Double Bunny and I had my answer in a couple of minutes tugging away on the end of my line. 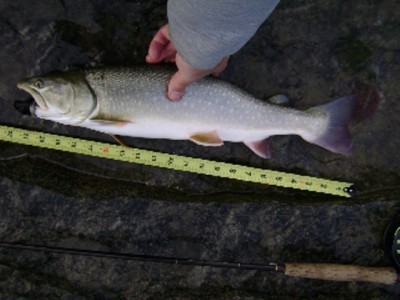 I was lucky it didn’t get into the fast water or I’m sure it would have spooled me. It was  21 inches around 5 lbs and was caught on a fishskull black/ tan barred Double Bunny with a stinger hook. 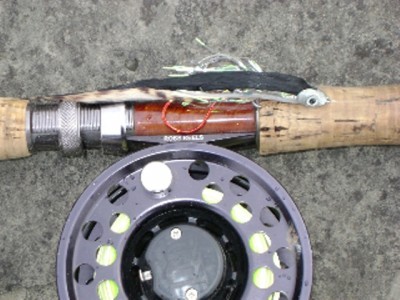 I kept fishing the DB thinking he probably wasn’t big enough to  scare away all the fish.  After 20 minutes I switched to my spinning rod , pencil weight and a green/chrome spin n glow. The logic being that I wasn’t getting my flies down deep enough. I had some taps right away and was getting excited about hooking a big fish. Then bang fish on! Before I even got the slack out a 17 inch rainbow rocketed out of the water. 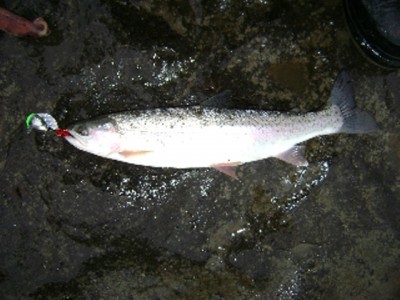 As I was fighting it a big chopper came over the river valley up stream of me. Some one must have seen me  as it veered hard of course and hovered out over the river and watched me land the trout. I held it up for them to see and I sure hope that there was some decision makers for Hydro on board so they could see what an awesome fishery they could destroy with the Site C dam.

Over the next couple of hours I hooked 7 rainbows landing three. All were Airborne 1st Division and jumping wildly. I would go back to the nymph rig ,nothing,over to the big spin n glow ..bang rainbow. Just couldn’t get my flies down in the zone with the current. Took home three 16-17 inch rainbows for our fish fry.

Lord knows it’s all about keeping the wife happy! 😉