You are Here: Home >> Blog Posts >> Fishing Reports >> Finally Ice Off in FSJ!

Finally Ice Off in FSJ! 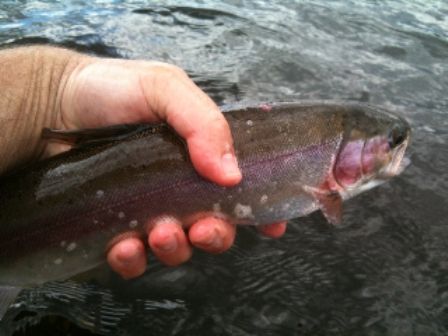 April is a cruel month in the North. I remember growing up in the North Okanagan and April was all about green grass, leaves sprouting, flowers starting to bloom and warm rains. Now April for me is below zero overnight temps, the odd blizzard and dirty sand and gravel covered snow piles on the edges of the roads. Oh yea the other big downer… ice covered lakes. 🙁  You can only read and hear about so many ice off adventures down south before you snap. Tying helps,sort of, but when the shack nasties get out of control I’ve found a remedy that works for me. Mexico! 😀 Baking in the sun thawing the marrow of my bones and floating in the warm Caribbean works wonders. I came home to snow gone and reports of lakes starting to break-up. So I went fishing … and here’s the first Northern BC Fly Fishing Report of 2013!

So with the Mayan four main food groups (lime, coconut, rum and tequila) still working through my body I planned a long weekend Friday fish. A quick raid, get in and get out, before the camping hordes descend fishing trip. I pre-packed Thursday night and was up at 5:00 AM and on the road at 5:20. I got to the lake and it was glass, not a ripple on it. Sunny and dead calm is not always the best conditions for wary trout but sure beats the hell out of white caps, especially when you are in a float tube. I inflated my tube and put it into the lake. I always do this first as it gives the air in the tube time to cool and then I pump up again just before I head out. The ice had been off maybe 9-10 days so I knew the water would still be ice cold. In my early float tube days I had a pair of 7mm neoprene waders that resembled a diving dry suit. In fact they were the first model made by Wardell who up until then made diving suits. The only problem was that you had to strip down to get in them they were that tight. So it was bare feet and shorts. I still usually lasted longer than the other guys before shivering to shore and crowding the fire.

Fast forward to now and my ice off attire consists of: long johns, wool socks, jeans, insulated bib coveralls and neoprene sock breathable waders! With this set up I was able to stay out for 6 hours no problem. Could have stayed in the water longer without an issue. I headed out with two rods, one rigged for indicator fishing chironomids and the other a Type 6 sink tip for dredging. While setting up I kept scanning the surface of the lake for any signs of fish. With no sign of action I kicked out to the near end of the lake to fish off the submerged trees and the shallow weed bank. The first couple of hours were uneventful suspending various chironomids and mini leeches at different depths along the end of the lake. The wind picked up a bit and I thought the ripple on the surface might help out but it didn’t. It got a little more windy making it hard to stay in place indicator fishing so I switched to the sink tip. I had on a Cactus Muddler (darner imitation) and trolled, cast, stripped and wind drifted down the far side of the lake. 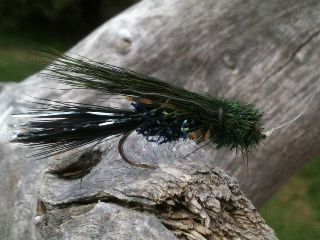 In approaching the far end of the lake and there was a pretty good chop pushing toward shore. I was just turning to run parallel with the shore and rummaging through a fly box looking for the next fly. In fact I had just plucked a green sparkle leech free when I heard a big splash right behind me. I spun around to a spreading circle of rings 10 feet away. As I was hitching myself up a little higher in the tube there was a series of taps on the sink tip. Okay found the fish down at the windward end, pushed up close to shore in 6 to 8 feet of water. The next couple of hours were what the doctor ordered casting out the dragon, letting it sink and stripping it in. They weren’t hitting on a slow hand twist retrieve, only on fast 6″ to 8″ strips. I hooked around a dozen and brought six to hand. Outside of one that spit the hook by the tube in the 4lb range, the rest were 17″ to 20″ long and lean. I hooked one other fish trolling back to the jeep. This was right in front of the boat launch and with every run it took the two guys launching their boat would stop and watch then speed up their loading and prep. I had been just like those guys earlier, all excited, anxious and hurrying. Now I was calm, satisfied and heading home. 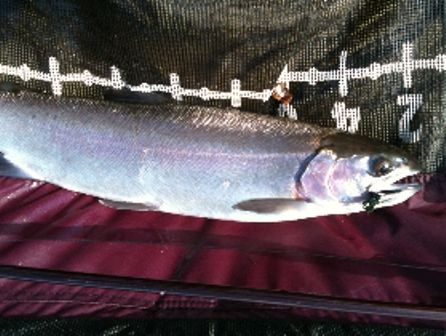 And that’s how it ended, driving home mid afternoon against the steady flow of trailers, campers and quads, humming some unknown Salsa tune. 🙂

4 Responses to Finally Ice Off in FSJ!