The boys and I had missed out on two spring fishing trips and I have to say I was getting a little bit antsy. Late spring, I threw out the possibility of a Fall fly fishing road trip hoping that travel restrictions would allow it. Don had already booked time off in late Sept so this was going to be our window. We had talked of finally make a run into the Chilcotin for a couple of years and I figured it was time to make this a reality. The middle of June when things looked promising I checked with the lads and proposed this and added that maybe we should look for a cabin this time. We usually set up a camp with enough tarps and gear to equip a battalion but fall near the Coastal mountains could throw some nasty weather. The thought of low temperatures and getting soaking wet, then retiring to a wet camp just doesn’t sound that appealing anymore. When we were younger it didn’t matter, Hell, high water, snow let’s go. Now though the thought of falling back to a cabin, beds and stove to fire up and dry our gear, sounded pretty enticing. One morning I got online and started scouting out cabins in the area we were thinking about. I marked about 12 places and sent an email to the boys that the search was on. A couple of hours later went back and checked the sites and all but 1 of the 12 was already booked. The removal of travel restrictions had opened the flood gates for people wanting to get away. I made a quick Executive decision and booked a cabin on Eagle Lake. With 4 days and 4 nights set, the discussion of lakes to fish began. It was a long three months waiting for late September.

When the date finally rolled around I loaded the jeep with my pontoon boat, float tube, mobile fly-tying kit and good selection of rods and reels. I drove down from Fort St John and hooked up with Donny, coming from Vernon, in Chucks Puddle. We headed West on Highway 20 on a beautiful fall morning with not a cloud in the sky. A couple of hours later we pulled into Eagle Bear Lodge and were thrilled at the picturesque location. Butted up against the Eastern side of the Coastal mountains. 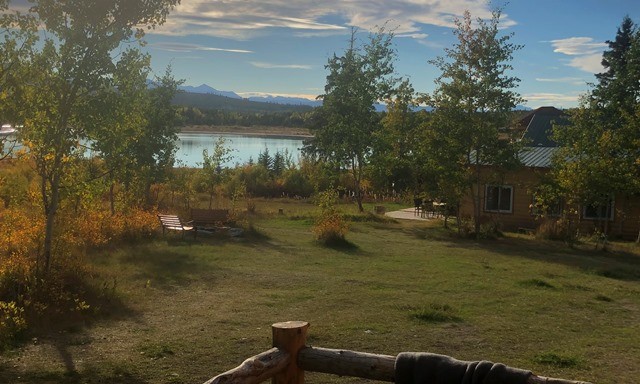 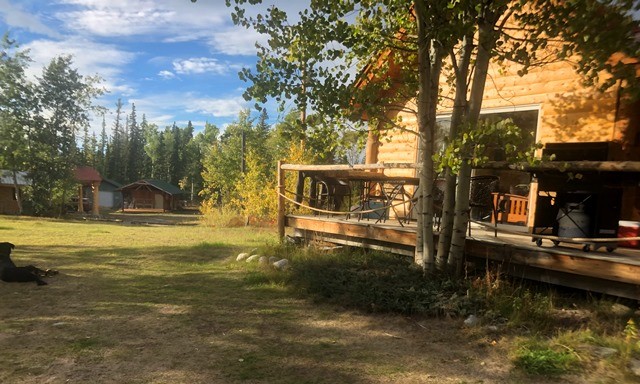 It became apparent right away after meeting Dave and Jenifer (the owners) that this was going to be a relaxing, stress free stay. They had left their hectic lives in Toronto and bought this place and are in the process of adding on and
updating all the cabins. We checked into the cabin then packed Don’s boat down to Eagle lake and headed out for a bit of a fish. Eagle is a beautiful lake with turquoise waters in the shallow areas. 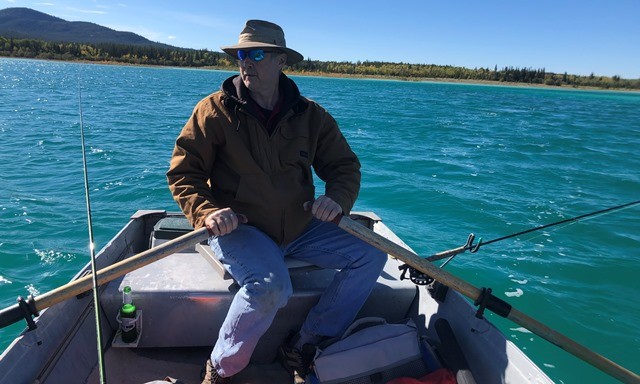 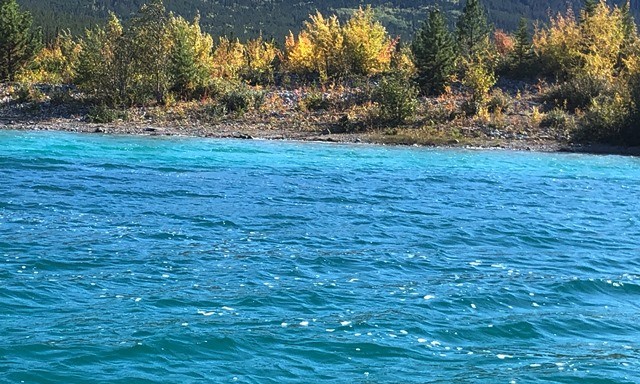 After a couple of hours, we headed back to set up the cabin and fire up the BBQ on our deck for a feed of Texas Burgers and some beers. This was when we were introduced to the obligatory camp hound Trooper who became a close friend over the next four days. 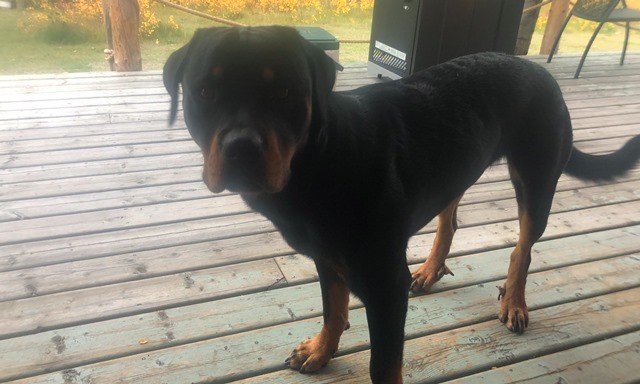 The next day we headed out to the first of our targeted lakes. It was in a low bowl area and had weed beds by the launch. Looking at the maps I thought we would be by ourselves on this lake but when we pulled in there was a group of
5 guys from Kelowna and Delta that were setting up shop on what was there annual trip to this lake. There was hardly any wind and I opted for my float tube. I was having issues inflating the pontoon boat and to be honest after all these
years I’m more comfortable in the tube. It’s a hands-free fishing vessel with no rowing and a hand on the rod most of the time. Don was in his boat and we did some trolling around looking for signs of fish. There was no action by shore but we could see risers out in the middle so went to have a look. The water wasn’t that deep and there were some weeds but what caught my eye was the Chirony cases. Don was doing well on a Pumpkinhead, which evidently works in any body of water, thanks John. I dropped anchor and tied on a black bead, black and silver Chrony on a size #14 red hook …

After some trial and error found that they were taking them 3’ below the surface. 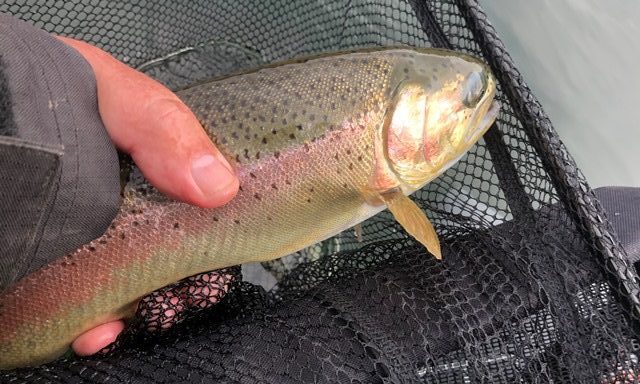 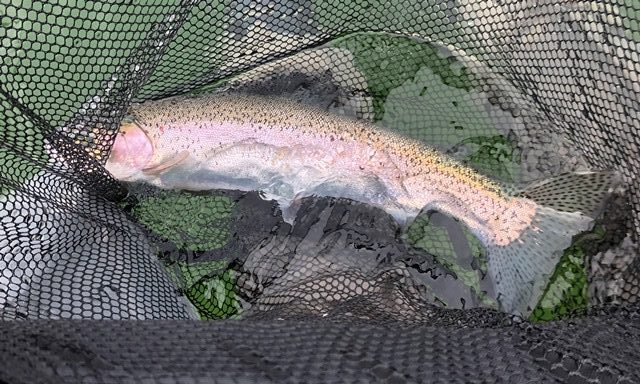 Nothing huge but a steady day of 16”- 20” fish. Then it was back to the cabin for steak night and yet more beers.

The next day was another calm sunny day and we headed off to the third lake that was more of a mountain style lake. Other than the area at the launch end, that a creek running in and had created a muddy delta, this lake dropped off hard not far from its shores.

I explored casting and trolling leeches on an intermediate line with a few taps. Once again in my tube I didn’t get to see the whole lake and stayed in the first KM of it. I finally pulled out the Type 7 sink line, tied on a Cactus Muddler and patrolled the sharp drop off. This paid off and even though I tried some indicator fishing in certain areas I always returned to the deep line as that how I was catching fish. They were down about 25’. 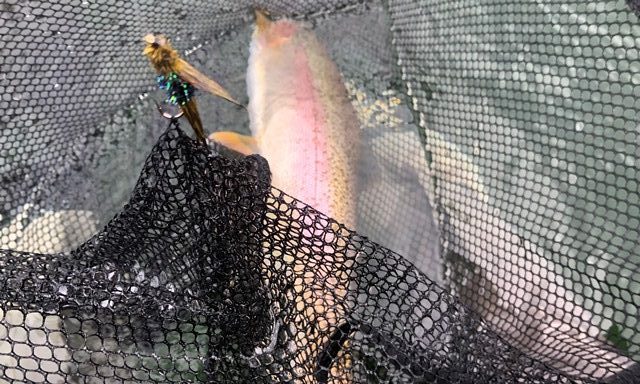 Don was catching with a Pumpkinhead and a small grey flashback nymph. Another great day and then back to the cabin for Rib night and some beers.

The next day was another calm day and we had looked at two lakes in the same area. One had better reports than the first but we stopped in to have a look at the other one before moving on. We walked down to the end of the lake and
there was a huge shoal extending out for a couple hundred yards. Definitely perked our interest but we drove on to the next lake and it looked like the mountain lake we had already fished. Steep mountains dropping down into the lake and
with that we went back to the lake with the big shoal. Talked to some guys packing up and they said they hadn’t had much luck over the last couple of days. That shoal just looked to good. 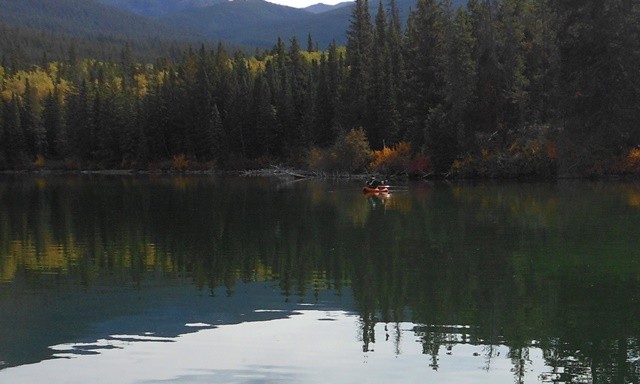 And it turned out to be pretty good fishing too. Minny leeches under indicators was working for me and for what seems like the hundredth time I asked Don “what you catch that one on” and the answer was “Pumpkinhead”. I looked in my fly box and thought Pumpkinhead eh, well let’s try this. On went a Midnight Pumpkin, basically a black Pumpkinhead and I finished off the day hammering fish under an indicator 10’ down in 12’ of water. 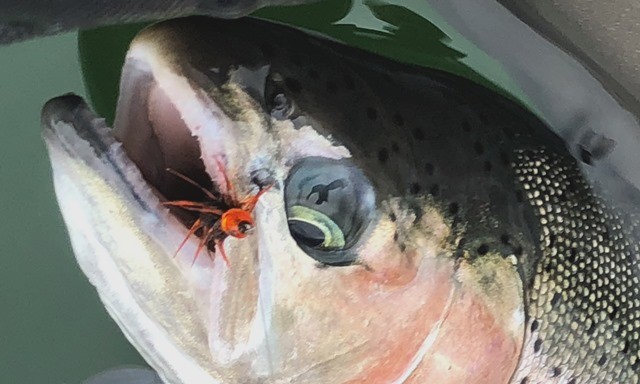 It started to rain the last hour on our last day and we woke up the next day to a windy morning which made it easier to pack up and hit the road. It was sad to leave Eagle Bear lodge as it was such a comfortable setting and big thanks to Dave and Jen for having us on their wonderful property. It felt like home for 4 days. Paying it forward we left some of our productive flies for the next fly-fishing guests to try. 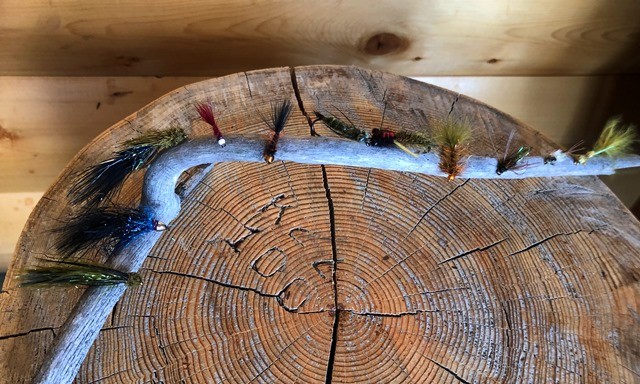 Thinking we might have to head back to the lodge again as we just scratched the surface on the fishing in that small part of the Chilcotin. Driving back to Williams in the bright sun, the fluorescent yellow poplars lit up the inside of the jeep like a flare. And I thought yes, I want to come back to this part of B.C. 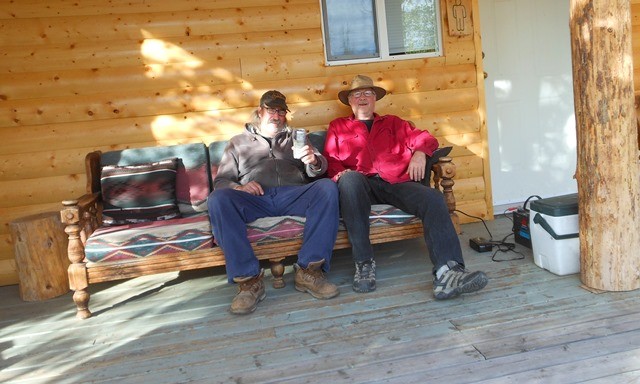 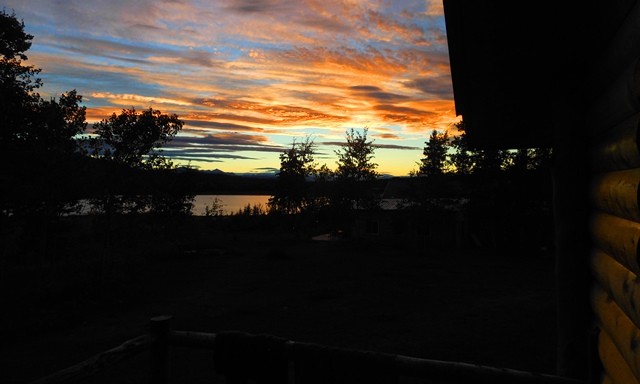