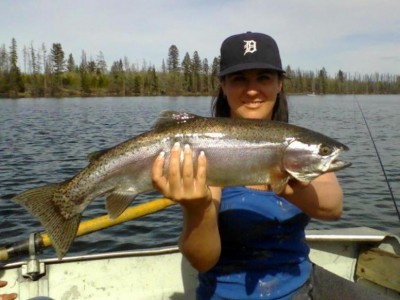 Renee with Her Nine lb. BC Interior Bow!

I’ve recently moved to Kamloops and have enjoyed getting back into trout fishing again and putting the salmon gear to rest. I couldn’t help but buy an Ice Hut and get out on the local lakes to see what this region is all about. With much luck ( asking local guys for advice ) I had an incredible season mostly spent on Red Lake and can’t wait to do it all over again … but that’s another story. For now here’s the story of a day we won’t soon forget!

With the Ice off and fly season beginning my sister and her boyfriend Brian, who is from 100 mile, invited my fiance Seliina and I up for a May fishing trip. With much pleading I got her up and on the road at the crack of dawn and away we went. We stayed at my sisters cabin on Ruth lake and spent the first day working the waters there with only a few small fish to talk about. The day before we arrived my sister and Brian tried a small beautiful lake just outside of 100 mile which had only Iced off for barely a week. They couldn’t keep the fish off apparently. After a few laughs and  drinks  we decided to hit up that special little lake the next day.

The weather was beautiful. The sun was out and the water was like glass. My sister and Brian were both on pontoon boats and Seliina and I were being rowed around by Jack ( Brians father ) who has fished these lakes for many years. We both had on a leech pattern – Caribou special I was told – Black with mylar in the tail. Not soon after getting the lines in Seliina had a nice fish on!  She lost it shortly after having never fly fished before it was definitely a practice fish. We continued on with her line back in she hit another fish and got it in. It was a nice just over 2 pounds chromer! 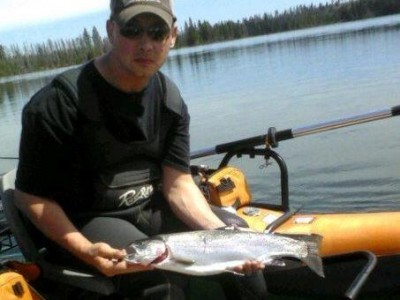 Brian landed a 5 pounder and my sister then landed a 3 pounder not too long followed by Selina landing another fish! Notice I still haven’t caught anything! We were using the same gear minus the rods … I was sure to get something soon … NOPE!

Seliina’s rod bends over hard and the fight is on. This fish is peeling line and heading right for the bottom. She fought this fish for what seemed like an eternity. When we got the fish close to the boat I could see it was a big one. I held my breath and didn’t say a word as to not give away what was soon to be in the net. I didn’t hesitate to get that fish scooped up and get it in. With much shock it weighed out at 8 pounds! I couldn’t believe it many people fish for a lifetime and never meet that goal. She giggled and said it was fun. 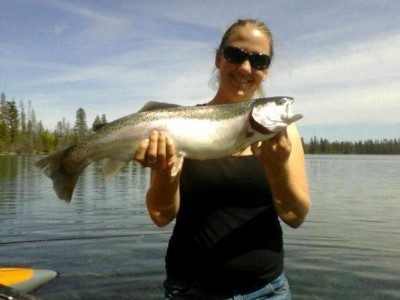 Selina with her beauty BC Interior Rainbow of a Lifetime!

Well now after all of that I seen the potential this day had to offer and was still not catching a thing. We drifted into shore and had some lunch I had a few beers and a pout. 🙁  I hadn’t been on a pontoon boat yet so I though I would trade up with my sister and give her my seat and take her gear since she was having luck. We headed back out on the water and got our lines wet yet again. I had some trouble adjusting to the pontoon but got into a rhythm after a while. I decided to head over to the far side of the lake and see what was happening. I finally got a hit but it just didn’t take. That’s OK. I heard some line peeling and giggling from the boat the girls were in. My sister was into a derby winner. I rowed my ass over there to see what this was all about. To my amazement she landed a 9 pounder!

Renee with Her Nine lb. BC Interior Bow!

Wow! Brian was shaking his head in dis belief. He fished this lake for eons and never kissed that weight. Well now I have to catch something. We did a pontoon to boat transfer and I was handed the hot rod. Here we go. After about a half hour I finally tied into a decent fish. It was a 3 pounder which now looked small to what the girls have dragged in previous. My heart still pounded and my smile came back. This was good. We kept on joking how since I had a lame day I would get the big one in the end.

By now the sun was setting and so was my rod tip into the water. Bam!  My line began to peel out like crazy. Here we go I thought. All the years of practicing drag set and rod tension came into action on this one. Left and right, straight down to the bottom and into the air! This fish was it! I stood up in the boat so I could get good control and see what I had on so I was at least assured the “one that got away” tale if it so happen to get off. After a dozen hauls on the line and some serious head shaking this fish was ready to meet it’s destiny. We got it pulled up along side the boat and Jack scooped it into the net. My god it was bigger than my sisters by a long shot! I couldn’t believe it! All the jokes we made about the biggest one came true! 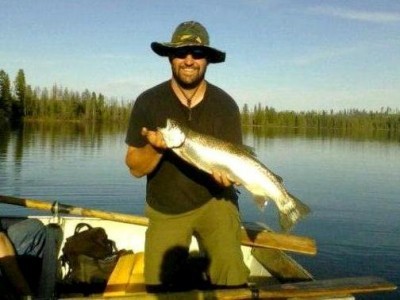 My 11 Pound BC Interior Rainbow!

The final weight on that fish was 11 pounds. We were all sooo happy about the day that we had and decided to make it a tradition. I will never dream that I will pull out another one like that again but I will never forget that incredible time we had. Even when my water pump blew on my car on our way home that night in McLure at 11:30 pm. I was still smiling on my way to work after only a few hours of sleep and a big bill from the mechanics.

Can't get enough of that fishin thing!
View all posts by johnnytrout →
This entry was posted in Fishing Reports and tagged 2012, Fishing Log, Fishing Report. Bookmark the permalink.

3 Responses to In the End!