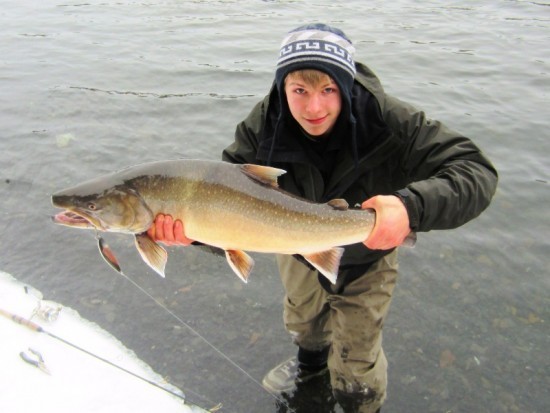 So today was the day, January 23rd to be exact, that I was going out to start filming my new fishing show for youtube. I was on the hunt for Northern BC Bull trout and knew exactly where I was going to shoot this segment. I thought that I would only be getting into fish in the five to ten pound range but, you know what they say about the best laid plans …

My destination was a little slice of Northern BC’s Peace river just South West of Hudson Hope. I started the day by experimenting with some Storm 6″ anchovy lures, which resulted in a hit on the first cast but then nothing at all. That was it for the first two hours … I was so shocked. I continued fishing throwing every lure I had at them and still nothing. So I switched to he fly rod, and tried every fly that I had and … still nothing! 🙁

Just as I was debating on giving up I looked into my tackle box again and found a brand new nice and shiny Blue Fox Teardrop Spoon. It was huge! I mean this thing was the size of my hand! I was sitting there thinking to myself “awe what the hell, there is no reason why I can’t try throwing this”, so I grabbed my spinning rod and tied on the big brat.

I reared up made my first cast, and away the spoon flew, soaring right through the air, until SPLOOSH … it hit the water. I didn’t even make my first crank on the reel before I felt something tugging on my line. I immediately reared up and set the hook and the fight was on! I figured the bull trout was near 10 lbs, then I saw him flop out of the water and realized that he was way bigger than that by far! 😯 My Grandpa looked over at me, eyes bulging out of his head, and exclaimed “you just beat my record, and your old mans record bull trout as well! He’s gunna be pissed when he finds that out”!

After reeling and tugging for near 10 solid minutes, I had the beast laying at my feet … so the first part of the battle was over. I was now realizing that I would have to grab him out of the water, the near freezing water, and its minus 18 outside!

So the good news is that we got it all on video, me hooking and fighting this monster, me shoving this giant Bull Trout into the camera, and then me rolling on the ground, in pain and agony while trying to warm my hands up! Well, that part is not going to be put on youtube, for embarrassment reasons but here’s what did make the cut …

So what a great day! I set myself a new record, I got frost bite on the tips of my fingers, got it all on Video, and I got to miss the day of school to do it all!!!

I fish well over, 200 days of the year. I work at Backcountry in Fort St John, in beautiful British Columbia, and fishing is my passion! I couldn't live without it!
View all posts by Dakota Mercer →
This entry was posted in Fishing Reports and tagged 2013, Bull Trout, Fishing Reports. Bookmark the permalink.