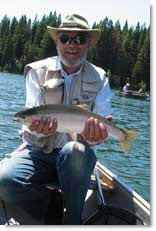 This summer, my friend and old school chum, Pat Harrison, came up for his annual fishing trip. On the first day, folks were catching fish on a large Chironomid and corky. Pat had always wanted to try fishing with a corky so that evening we stopped at Wholesale Sports and he bought some corkys and a couple of fly patterns similar to the ones we had been shown.

These flies were large, had a bead head and were thinly wrapped with various colors of shiny tinsel. I sorta chuckled at Pat’s purchase because these flies didn’t look like any Chironomid I had ever seen and were longer than all but the biggest Chironomids.

However, the next day Pat caught fish with these flies and corky as long as there wasn’t any retrieve. The fly had to be perfectly still without even a wind drift. Meanwhile my buggy and good looking Chironomids (and other flies) were totally rejected. We kept a couple of these fish and their stomachs were totally empty.

Since then I’ve been trying to figure out why the trout would take such gaudy looking flies while ignoring flies that actually look like the bug they are supposed to represent. I’ve come up with several theories about why this happened:

Theory One – These trout are stocked fish. In the hatchery, they are fed pellets. Perhaps the trout identified the bead head as a pellet and ignored the rest of the fly. That would explain why they didn’t want the fly to be moved.

Theory Two – Trout are attracted to unusual contrast or movement in there environment and will instinctively strike at that. Perhaps the fish weren’t feeding but the shiny tinsel set off this instinctive reaction in the fish. But that doesn’t explain why they wanted the fly still rather than moving.

Theory Three – (and the one I prefer) – There just isn’t any logical reasoning behind what fish feed on or why they feed the way they do.

One Response to Fish Feeding Theories