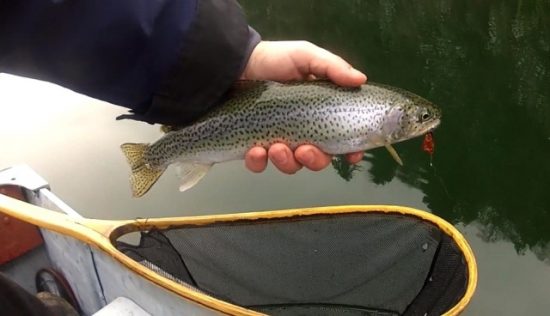 The icy winds of November and December mean an end to the stillwater fly fishing season in most of our province, but in here in the Fraser Valley they signal the beginning of one of my favorite times of year.  While many anglers target winter Steelhead on popular systems like the Chilliwack or Chehalis, I like to explore forgotten Fraser Valley sloughs and secluded backwaters in search of the elusive Coastal Cutthroat. 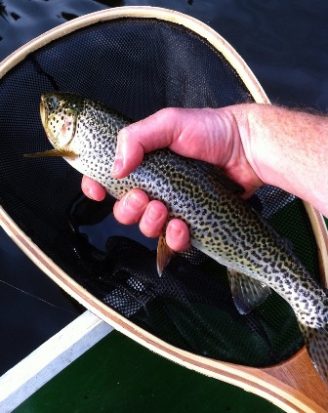 “Cutties,” as they affectionately called by many, are nomadic hunters, moving in schools throughout the waters of the southwest coast.  Some are anadromous fish, spending most of their life in the coastal waters of the Salish Sea and returning to the Fraser system to spawn, and some are year-round residents of our local fresh waters.  When you get to know them you can generally tell the two varieties apart, with the coastal fish often showing brilliant yellow tones and heavy spotting, and the resident fish usually bright chrome with anywhere from heavy to almost non-existent spotting.  The variation in appearance from one fish to the next is truly amazing.  In the areas that I fish, these fish tend to average about 12 inches and top out in the low 20s.  My friend who works for DFO says that he’s measured fish moving through his counting fence that were in the 27” range, but I’ve never caught a beast like that.

Remember, these aren’t steelhead: they generally aren’t big, they’re too skinny to make a decent meal, and they aren’t going to provide you with stories of blistering runs or epic tailstands. The allure of these fish is in the chase.  Because they are constantly on the move looking for new food sources or on a meandering migration to their spawning grounds, you can never be 100% sure that they will be where they were last week, yesterday, or an hour ago.

In the spring, they tend to rise frequently, alerting those with sharp eyes to their presence. In the winter though, maybe they’ll rise? Maybe for a few minutes? Maybe not at all? I once met a seasoned cutthroat fisher on a slough that told me that he never casts until he sees a rise.  Well, good for him if that works for him, but I’ve had 30 plus fish outings on days when he wouldn’t have gotten his line wet.  Long story short, even in shallow water, sometimes they just don’t show themselves in the winter.  If the water looks fishy, cast at it. 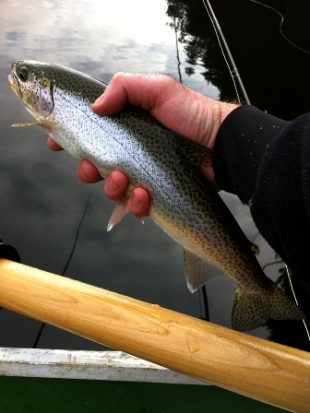 As for gear, I fish from my small boat any time I can.  There are a handful of sloughs in the upper valley that are accessible to small crafts.  In that situation, I generally fish a full-sink line with a longish leader (10ft) leader and a mini-leech.  The retrieve changes according to the whims of the fish that day, but it’s generally fast with regular pauses (“the hang,” which is a long pause usually near the end of the retrieve, can be deadly for this species). I know that tradition dictates that I should use a floating or intermediate line with a more traditional cutthroat pattern like a Mickey Finn or a Rolled Muddler, but the results have spoken for themselves in the past number of years.

If I am fishing from shore or from a safe, shallow location while wearing waders, a full sink is not feasible and I switch up to a more buoyant line.

Other patterns and techniques can also produce, including mayflies, gomphus, and even chironomids under indicators can produce occasionally as well.

As for likely cutthroat locations, really any slow-moving water that is attached to the Fraser will hold fish.  The key is exploring using Google Earth, your vehicle, and your legs. You will build your own repertoire of “spots” and guard your secrets closely, as many have done before you.

Enjoy your adventures hunting for these beautiful, sometimes elusive, and always exciting fish!

A big thanks to Christian Lodders for sharing his informative “Winter Fly Fishing Cutthroat Trout” article on flyguys.net. What a perfect fishery to extend the BC Interior open water fly fishing season. This is definitely on the “to do ” list! 😀

I’m 39, a teacher, a husband, and a dad to two wonderful little girls. In my meager spare time, I chase trout. In the winter, it’s Fraser Valley cutties close to home. The rest of the year, I make the short hop to the Merritt and Kamloops areas to hunt Pennasks, FVs, and Blackwaters. My preferred technique is whatever is working at the moment, but I generally alternate between ripping leeches on a fast sink line and staring at indicators.
View all posts by Christian →
This entry was posted in Still Water Fly Fishing and tagged Coastal cutthroat trout, cutthroat, cutthroat trout, cutties, cutty, fishing cutthroat trout, fishing cutties, Fraser Valley cutthroat trout. Bookmark the permalink.