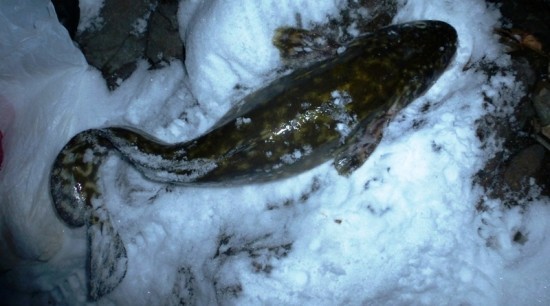 The burbot is arguably one of the ugliest creatures to inhabit our local waters. Ugly to the point that it is unimaginable how anyone could have ever decided to try and eat one! 😯  But thank goodness someone did because if you can get beyond their appearance they are one of the tastiest morsels that you can pull from the depths. This article is about ice fishing burbot, but first, a bit of information about them …….

Burbot is one of many common names for Lota lota, the only freshwater member of the cod family. It has a variety of other names across North America but in B.C. is often referred to as eelpout, cusk, freshwater cod or ling cod. Ling cod, however, is a saltwater fish unrelated to the burbot. 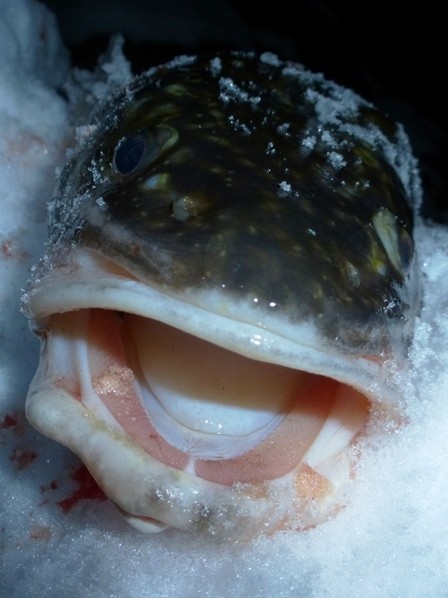 At first glance burbot look like a cross between a snake and a bullhead! They have a long body tapering to a rounded tail, a flat head with a long snout and a large mouth. They have a barbel on their chin and nostrils and two fins on their back … the first behind its head quite short and the second much longer. Burbot vary in colour from very pale to very dark, but are usually olive coloured with mottled, darkish markings on the back and sides and a yellowish or dusky coloured belly. The Burbot is protected by a heavy covering of mucus which gives it a smooth and slippery feel when handled.

Burbot are found in many lakes and rivers throughout British Columbia. They usually spends their time on the bottom in the deep cool areas of these lakes and rivers, and have been caught as deep as 200 meters.

Younger fish feed on aquatic insects. They are primarily nocturnal feeders that slither their way up from the depths to forage & hunt by ambush locating their prey first by smell, then by vibrations as the prey nears. Finally, when the prey is close enough, they make a rapid, close-range attack. They will continue to feed right through the night and can therefore provide hours of fishing action and fun!

Unlike any other Canadian freshwater fish, the burbot spawns in mid-winter (January through March) usually under the ice. They spawn at night, in shallow water up to one meter deep, over sand or gravel. Spawning usually takes place in lakes but occasionally in rivers. Female burbot can carry more than a million eggs. These eggs hatch after about 30 days and then go through a larval stage before growing into a fry. In BC, burbot live to a maximum age of about 20 years.

Some anglers would rather cut their line than handle these slimy creatures but the truth is that burbot are fun to catch, typically large, and make a fine meal when properly prepared. They are often referred to as the poor mans lobster and many anglers have discovered that they are excellent for fish and chips. Here’s how to fish them …………

***  regardless of where when and how you plan to fish Burbot, please check the regulations before heading out to be sure you are in compliance with the rules for your area.

As mentioned, burbot prefer cold, deep water and for this reason lakes and rivers are most productive when they are frozen. Burbot will also seek shallower water in the winter because the deeper water becomes oxygen depleted and offers less food.  Most will move into water 25 feet deep or less therefore placing them at comfortable ice fishing depths. Add to this the fact they they are nocturnal creatures and the stage is set for some evening ice fishing fun! 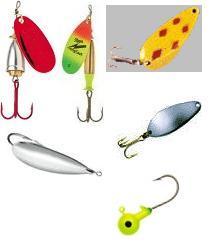 Burbot, at least in our experience, rarely run hard when hooked and therefore your standard ice fishing rod or simple spool of line matched to the size of fish in your area will suffice. The terminal tackle can be as elaborate as you like but with burbot we like to keep it simple. Ice jigs, spoons, spinners, glo hooks, rattlers or just plain large hooks and bait will all work. Also, since you need to fish near or on the bottom, weights should be added about 18 to 24 inches above the bait.

In BC, at the time of this writing, any chunk of meat from any creature other than a fin fish is legal and works well. Roe also works as do chicken livers, squid and worms. And, it seems with burbot, that quantity is more important than quality so to enhance your odds at enticing one of these voracious carnivores be sure your bait is large! Last but not least, if the bait alone doesn’t do the trick it can be a good idea to try and attract their attention visually through movement via jigging … and as a tip, burbot seem to like their food big but their motions slow. 😉

In British Columbia’s Thompson-Nicola Region 3, we know of only four lakes that offer the opportunity to fish burbot – Nicola, Douglas, Mamit & Kamloops Lakes (if you know of others please let us know in the comments section below). And of these four, only one, Kamloops lake, has a retention quota while the remainder are (at least currently) catch & release only waters. A further anomaly with Kamloops lake is that it’s low elevation rarely allows it to freeze up enough to offer safe ice fishing opportunities. So, to take advantage of it’s close proximity and abundant, retainable freshwater cod supply, you have to fish them from shore. 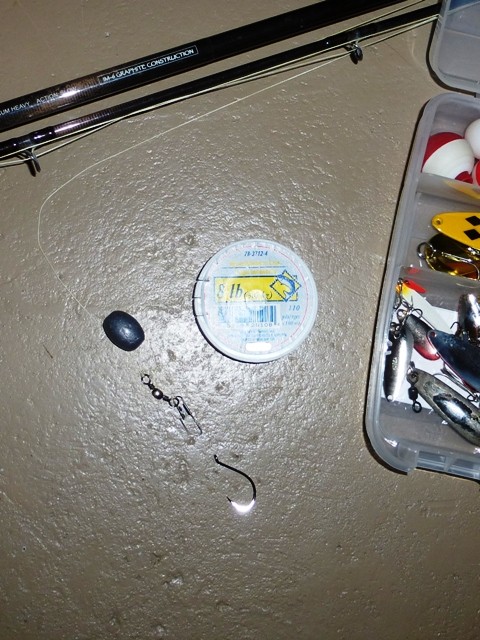 The gear to shore fish open water burbot is quite different from the regular ice fishing equipment as you will need a rod with the ability to cast out from shore and into to deep water. We’ve been using our salmon rods rigged with 20 – 30 lb mainline but any casting rod with a capable reel will work. Other components of the setup include snap or barrel swivels, egg sinker weights, 8 – 12 lb leader and a good bait hook.

The rigging consists of the egg weights slid onto the main line before the swivel is tied on. Next a 3 – 5 foot leader is tied to the swivel and a hook attached to the terminal end. Finally, the hook is baited and you’re ready to go! The bait is the same as for traditional burbot ice fishing, big and stinky, and we have had good success with squid, eel and chicken livers.

So now that you’re rigged up the only thing left to do is cast out, let everything sink to the bottom, reel in the slack until the line is tight with only a slight bend in the rod, and wait for a bite. 🙂 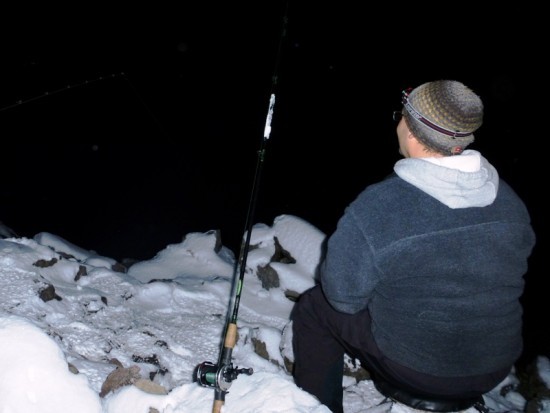 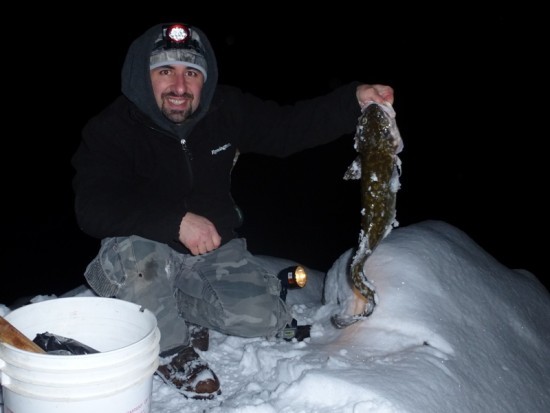 So that’s it folks! There’s really not a lot to it so whatever your preconceptions set them aside long enough to give ice fishing burbot a chance … we’re sure that even the loudest critics will be cracking a smile and licking their lips after battling and battering a lunker!

… and on that note, if you get lucky be sure to try Mamma Rosa’s Simple but Delicious Fried Burbot Recipe where you’ll not only learn how to cook but also how to skin a burbot! 🙂