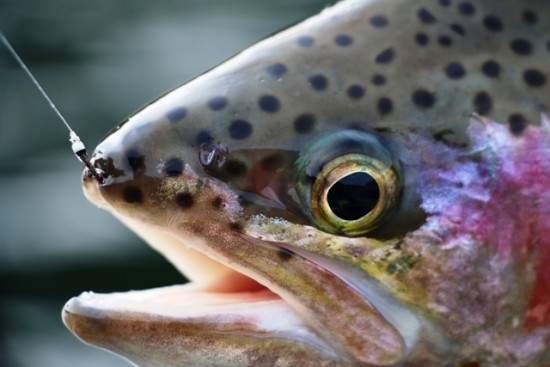 Over the last few years the Zucchini Chironomid Fly has become one of our most popular and most requested chronie fly patterns. And justifiably so. It is typically the first fly tied on once the spring chronies start hatching and it rarely needs to be swapped out! I was recently asked if we invented the Zucchini. Well, although I can honestly say that at the time of its inception we had not heard of anyone else using this particular material combination, it seems unlikely that we would have been the first to put it together. The name however, and arguably a good portion of its recent popularity, can certainly be attributed to flyguys.net. But all of that is really irrelevant. What matters is that this extremely simple, highly versatile chironomid pupa imitation is extraordinarily effective at enticing trout to strike. If we had to choose only one chrony pattern to fish with, the Zucchini Chironomid Fly might just be it!

* … for those interested the post includes a fair bit of detail on the history of the Zucchini chironomid fly. If you prefer to skip it you can jump to the instructional video here.

T original body material used to tie the zucchini chironomid fly produced a slightly different finished product. After purchasing the necessary materials to restock our fly boxes of depleted “Darkomids”, another great chironomid pupae fly pattern that we were using quite successfully at the time, we hit the bench only to be disappointed when we noticed that the blue tinge holo black tinsel which the Darkomid utilized was now predominately green tinged.  It seemed that, as happens occasionally, the manufacturer had changed the dye lot and, just like that, the Darkomid chrony became an endangered species.  So, we did what any rational

fly fisher / fly tier would do; feverishly scour fly shops and online fly tying material outlets and hoard whatever blue tinged black holo tinsel we could get our hands on!  And although fairly successful in that pursuit,  we knew that ultimately it was only a matter of time until our stock pile of obsolete body material would dwindle away to nothing and that we therefore better start putting the new green tinged black holo to the test. 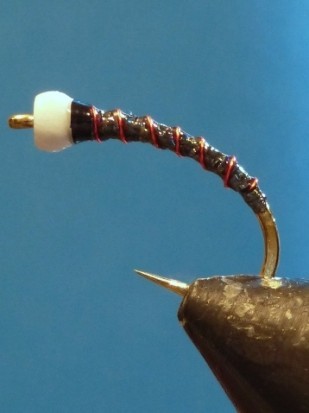 So, we tied up some Darkomids with the new green tinged black holo and tried to convince ourselves that the fish wouldn’t be able to tell the difference. Long story short, after exhaustive market research (AKA fishing), I can honestly say that I’ve never been so happy to be wrong! Turns out the fish could indeed tell the difference, and that difference was apparent in terms of an increase in fishing success! With that realization there was only two things left to do: 1) stock up on this new green tinge dye lot version of black holo tinsel before they change it again; and 2) come up with a name for this new little gem. The stock piling was easy on me but hard on the credit card … but it HAD to be done! As usual I struggled to come up with a name and, as usual, I sought out family members for ideas. My daughter Genna took one quick glance and instantly  proclaimed that the colour looked the same as the ripe zucchini’s in Nana’s garden. Well, that was easy … the Zucchini Chironomid Fly was born. 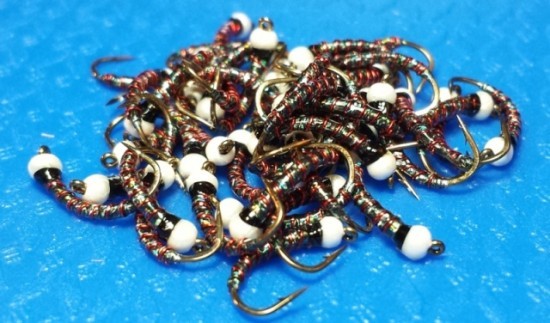 At this point the new Zucchini Chironomid Fly was working well but, despite the krazy glue body covering, the fish were going through them fast and furiously. Hardly a terrible problem to have right! The main issue seemed to be the rib so in an attempt to make the fly more durable, and at the risk of losing productivity, I switched out the original red holo rib with red wire and threw the tweaked version back out for testing. 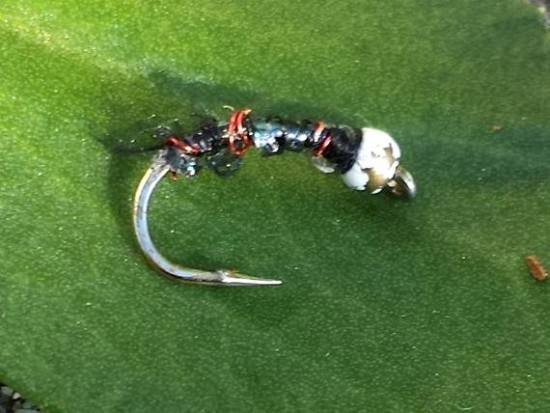 We fished the new wire ribbed zuke for another year before sharing it publicly, and in that year it continued to impress. The wire rib definitely made the fly stronger while in no way detracted from its allure to fish. In fact, the more the fish beat it up the more the zuke seemed to attract them … check out the battle worn zuke on the left! The Zucchini Chironomid Fly was complete.

The simple zucchini chironomid fly has proven itself as very effective and incredibly versatile. Although predominantly tied on scud hooks from #10 – #16, we also tie and fish it as a straight shank or natural curved bomber where it is equally as productive when the big boys are hatching off. (more on this later …) 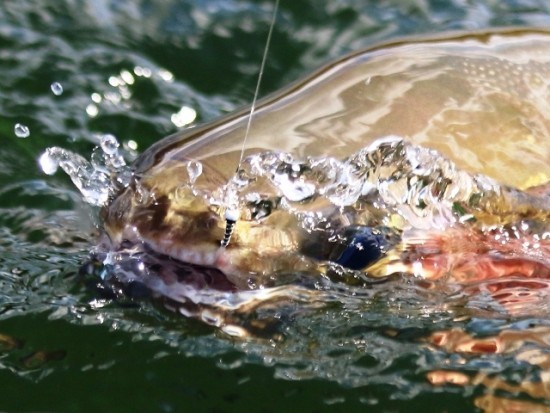 Hooked by a Silver Zuke! (photo by Adam Bruno)

As well, the shiny dark, almost black, overtone of the Zucchini’s body material makes it perfectly suitable to imitate not just dark green/olive chronies but the pure black ones as well.  In fact, in certain light I’d swear the zucchini is black, and it’s not until held up to sunlight that its olive/green tinge can be seen … a feature which I’m sure contributes to its success. Long story short, and although realizing the hypocrisy in suggesting the acquisition and use of a fewer rather than a greater number of chironomid fly patterns, the truth of the matter is that I rarely use pure blacks anymore as the zucchini usually covers it just fine … dare I say perhaps even better.

In addition, we have found that substitution of the red wire rib with a silver wire rib (the Silver Zucchini Chironomid Fly) will occasionally out perform the original, especially in very clear water lakes (see photo above). And like the red ribbed Zucchini, the Silver Zucchini variant is as capable in imitating the pure black & silvers as the original is the black & reds. 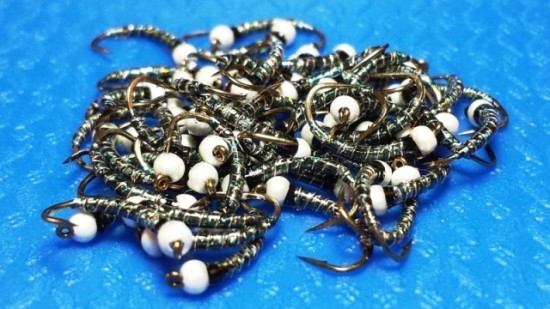 I don’t think it’s a completely equitable comparison to say that the Zucchini’s black holo tinsel has done for black and dark green phase chironomid patterns as what the Chromie’s silver holo tinsel did for the greys, but there are certainly days where it feels like it!

The above listed materials are for a #10 scud hook size tie. 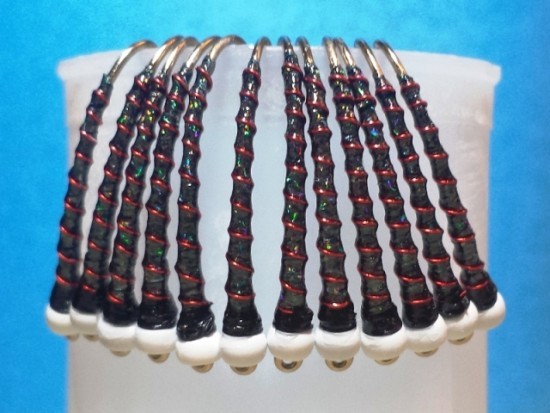 For bombers, substitute the Togens Scud hook with a Togens Curve Nymph hook in #12. For monster bomber chironomids, like the behemoths found at lakes like Tunkwa or Red, you can even go up to a #10. Either way bump the bead size up to 1/8 and keep the wire size at BR. To save on time and tying thread, use floss or uni-stretch to build up a smooth tapering under body on your zucchini bombers. Optional bomber hooks that we have used with good success are the Mustad C53S and the TMC 200R, but any other natural bend or straight shank hook that you prefer should work just as well.

For smaller scud hook ties use the following material ratios:

Alternate scud hooks that we have used with good success are the Mustad C49S and Daiichi 1130, but any other scud hook that you prefer should work just as well.

This is an very simple to tie chironomid pupa fly pattern, which is partially why we didn’t put a tying video together sooner. But as the fly’s popularity continues to grow, so it seems do the requests for clearer tying instructions. So I guess it’s time …….

* … fair warning this is not the most exciting video you’ll ever watch lol!

That’s it folks it just doesn’t get any easier than that! Holo body, wire rib, wind em up, tie em off, glue the sucker, go fishing!