You are Here: Home >> Blog Posts >> Fishing Reports >> The Triple F Comes Through in the Crunch

The Triple F Comes Through in the Crunch 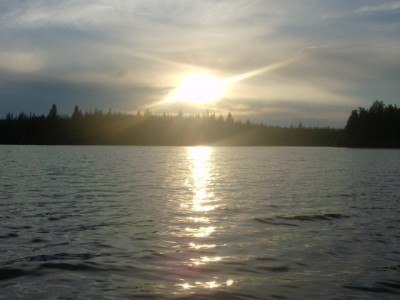 A Beautiful Night On Yet Another Kamloops Area Lake!

Well tis that time of year so we packed up our fishing gear – heavy on the caddis patterns – and hit yet another gorgeous Kamloops area lake.  Today’s lake sits at just over 4000 feet and is home to more than a few monster Penask rainbows. Needless to say we were pumped to finally get out   (it has been a while) in hopes of catching a traveler sedge hatch and landing a few little piggies!

We arrived at the lake shortly after 2:00 PM and after setting up our gear spent a few minutes talking with a nice couple who had been camping at the lake for the last two weeks – we didn’t like what we heard. Apparently the fishing had been very slow and the caddis hatch, although beginning to show for an hour or so each evening, had been almost non existent. Oh well we were already there so we were committed to give it a go – and who knows maybe this would be the night that it all came together … right?

Wrong. In fact, after a few hours on the water it was evident that it wasn’t just the caddis that were playing hide and seek. There was also no sign of damsels or dragons and only a very few small chironomids coming off. Not even the fish were moving and the fish finder was not revealing where they might be.

Despite this lack of insect and fish activity we persevered but came up empty handed. Oh well, it was now about 5:00 PM, still early, perhaps something would develop soon.

Wrong again, and by 6:00 we decided it was time to pull out the heavy hitter and out came the triple F!

Well the next few hours made up for the slow start and our first fish of the day was caught almost immediately after changing over to the triple F. Nothing spectacular but proof that there were indeed fish that could be caught! The action continued with slight but spunky fish till finally we got a hit that felt like a freight train! Shortly after, and despite putting up a valiant fight, we hauled this 7.2 pound torpedo of a fish into the net! 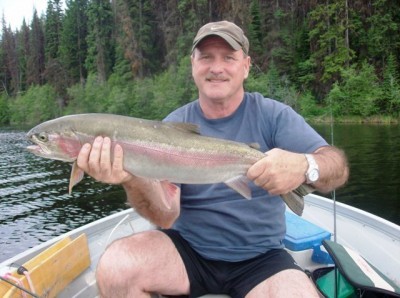 The next big guy we hit was a story in its self. It began with another awesome take but then almost no fight. The weight was there but it felt like a boot and when we finally got him near the boat he looked clean and healthy but it appeared that he was snagged in the middle of his body. When we finally landed him, however, we discovered that he was not foul hooked at all and the bend that we were seeing in his body was either due to a deformity or an old injury when he was younger – perhaps a loon attack.  Anyway, it had obviously not held this fish back as he had grown to almost 6 pounds so we quickly snapped a few pics and sent him back on his way. 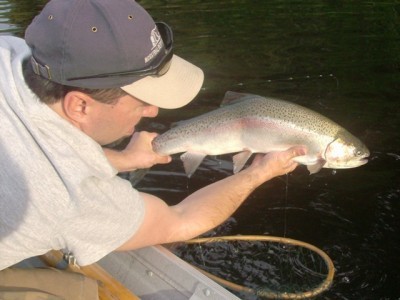 By this time it was almost 9:00 PM and with no caddis hatch even remotely under way we decided to pack it in and head for home. Thanks to the Triple F  it ended up being a great outing!

... flyguys chief webhead, when not fishing ;)
View all posts by BCFlyguys →
This entry was posted in Fishing Reports and tagged Kamloops Area Lake Fishing Report, Leech, The Triple F. Bookmark the permalink.