You are Here: Home >> Blog Posts >> Fishing Reports >> The Dog Days of Autumn!

The Dog Days of Autumn! 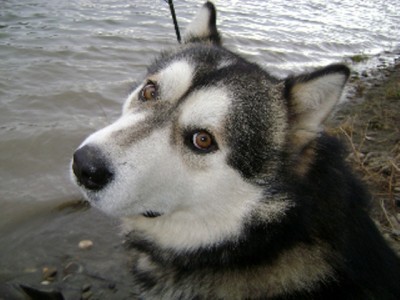 Saturday morning the alarm goes off and the wife gets up and starts to get ready for work. I on the other hand burrow deep under the comforter and listen to the wind rattle the bedroom windows as it has all night. I really should take the dog, get him out and go fishing. I crack one eye open,still dark. I flick the Tv on and check the weather channel. 1C calling for highs of 5C winds 40km gusting to 70 km. I see the wind chill is -5C and burrow deeper under the comforter. A half hour goes by but I can’t sleep I’m feeling guilty about not taking the dog for a romp. It’s been a month since I had him someplace where I can cut him loose. That’s the thing about pups/young dogs you have to pick your spots to bring them along. That especially goes for a Giant Alaskan Malamute. He’s a rambling wreck from Georgia Tech that, though harmless, still will jump or knock over anything or anyone. Put him in a boat? Not yet! I lean up and l looked out the window, no snow well that’s a start. I lean back and start thinking… you know in January, a day like today, would feel like a day on a Caribbean beach.That’s it I’m up, jeep loaded and rolling in 20 minutes.

We headed for the Halfway Hole on the Peace River about a 40 minute drive from town. We started down the trail to the river when I saw what looked like a black bear off the edge of the trail up ahead. I thought it might be sleeping so approached it making noise but it didn’t move. Turns out it was dead and something(s) had been eating it. Don’t know if it was shot, hit by a vehicle or killed by a big boar as it appeared to be only 2 years old. Of course before I left him the fly tier in me took over and I patched out a chunk of skin. 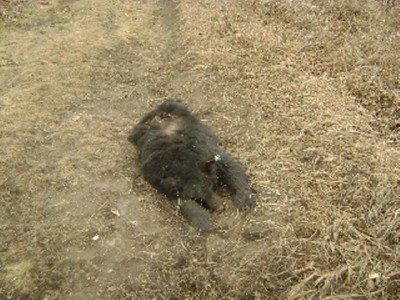 Onward to the river which as usual of late was running high. I packed in my fly rods along with my river rods but with the wind it was just for moral support. The spot I was fishing in this high water left me kinda “Up against the wall you redneck mother”. Other then with a spey rod there wasn’t much room to cast a fly. I settled into casting spoons and bottom bouncing spin-n-glows as the mutt ran up and down the shore barking and snapping at the waves. About an hour in and I hooked something heavy on a three inch dimpled silver spoon. I fought it about a minute but never got it up or in close enough to see it before it got off. I had enough taps over the next couple of hours to keep me interested.At one point I switched over to a pencil weight and a white with red slashes spin -n-glow when I got another solid hook up. Took about five minutes to land him and it turned out to be a nice 30 inch bull trout. 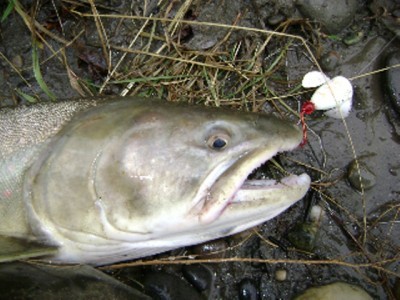 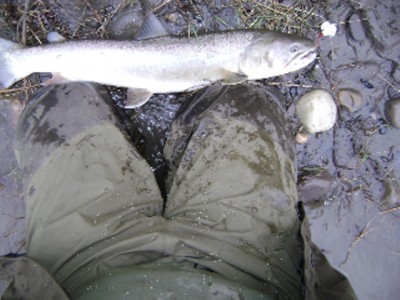 Fished another hour with nothing and the fingers were starting to seize so we packed it in and called it a day. If it hadn’t been for my pup I’m sure I wouldn’t have fished that day. Turns out the weather this week is going to dip below zero and who knows when it’ll come back up so really glad we got out.

One Response to The Dog Days of Autumn!