In the midst of last year’s Rocky Mountain Grand Slam, Steve and I were already planning this year’s trip. We both thought we’d come a couple of weeks early around the middle of July. Even though this year has been like an India monsoon season, Steve had been working up the Highway a week before we left and said they didn’t get hardly any of the deluge Fort St. John got. So there we were loading the jeep Thursday morning in a steady drizzle. 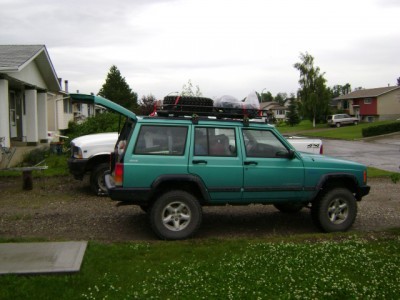 We got about 80 miles up the Alaska Hyw. and the sun was shining. Smiles all around. Later when we veered off the blacktop there was dust a flyin’ and more smiles. When we crossed the Halfway River she was high and chocolate. We still figured with so many feeder creeks it was bound to be the sum of all parts. We then headed up a trail to our destination tributary but didn’t get far as a feeder creek to it had blown out the road.

It’s a good thing my winch bumper hadn’t come in yet or I’m sure I would have convinced Steve to winch across and carry on. In hindsight I must learn to listen to Steve more often as the creek we ended up on came up 7 inches over the 3 days and I’m not sure I could of got back across where we planned to go.

We back tracked and started up another road to another trib. When we came to a bridge with some tires and survey ribbon on the deck. 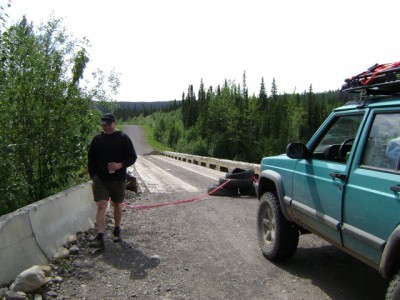 Looks like this is the end of the road!

Thank goodness because the far end was washed away with a 20 foot drop! 😯 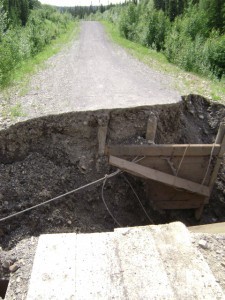 yup ... this is definitley the end!

The “creek” was roaring but the water had 12 to 16 inches of visibility so we pulled off and set up camp. 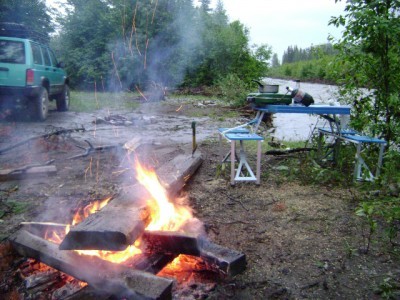 ... home away from home till we figure out where to fish! 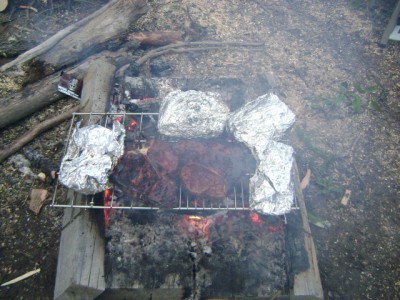 ... in the meantime we needed some food to go with the "beverages"!

As we were rigging our rods the thunderheads were breaking over the mountains. We went down stream taking game trails. Every time we came to the edge of the “creek” it was right up in the shrubbery and raging pretty good. Finally found a back eddy we were able to ford across onto a gravel bar and fished it for most of the afternoon. Lost lots of flies but no hint of fish anywhere. By the time we got back to camp it was raining and other than a stretch one night it rained the rest of the trip.

That evening we were driving around looking for firewood and access to the raging “creek” when down a trail we stumbled upon a cairn. We had come across the old North West Mounted Police trail to the Klondike built in the late 1800’s. 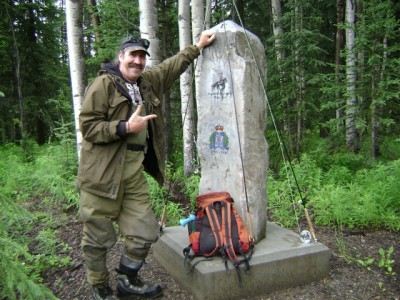 We have pretty detailed survey maps and it looked like the trail skirted the creek all the way to the headwaters and up into a pass through the Rockies. We planned to come back the next day and follow it and see if we could get some decent access to the creek. Since this trip was to unwind from too many days of work, back in camp under our tarp we hung a lickin’ on a cooler of beer and a jug of rum.

Next morning (mid morning) we geared up in our waders and full rain gear and headed for the NWMP trail. It started out not so bad but soon we were skirting swampy area’s and the bugs were such that you didn’t want to stop moving. I’m sure we left a lot of drunk mosquitos in our wake. 🙂 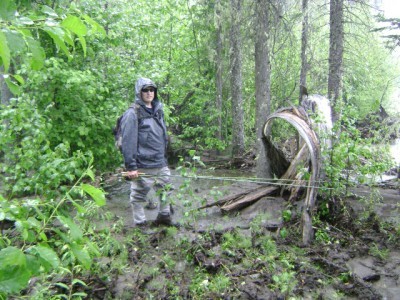 ... bush whacking for access to a decent fishing spot

The only tracks we saw were that of a huge moose and a pack of wolves that were veering off and on the trail the whole way. After 4 or 5 Kms.  it was apparent that we weren’t getting any closer to the creek so we went cross country (read swamp) and finally punched out on the bank. Same story as before, water right to the shrubs and roaring by about 6 feet deep. 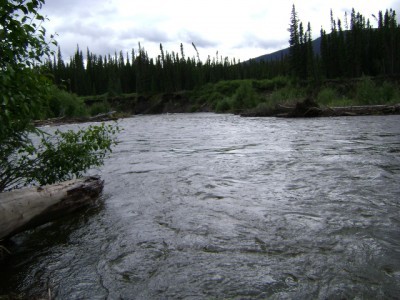 Exhausted we plunked down in a little opening, sipped a couple of brews then headed back to camp. 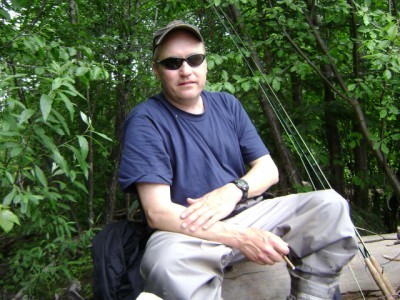 It rained,the creek came up,got dirtier and we ended up doing a lot of tarp time. Very relaxing (not!). There would be no SLAM this trip, we didn’t even touch or see a fish. Once again some serious tying for a trip went for naught.

Okay this is a fishing site so fast forward to last Friday. Steve had been fishing the “Fingers” on the Peace River and had some luck so off I went. Got there around 8:30, checked from the bridge and they were high and dry. Perfect. As I climbed down to the edge of the cliff something was amiss. The huge fir tree that all the ropes and ladder were tied off too was gone! I skid down and peeked over the edge and saw the ladder was still intact with the tree snapped off about 2 feet up but the tie in point on the roots was still there! 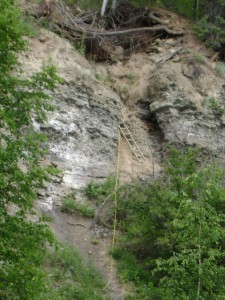 I got down, made my way out into the middle of the river and made maybe 10 casts when the warning sirens went off at the Dam. Packed up got to shore and within 10 minutes no more fingers just roaring Peace River. Sigh. 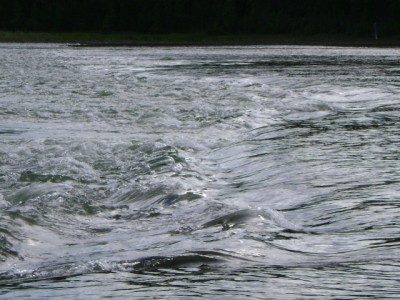 OK plan “C”! Back up the cliff and a quick drive to good ol’ Alwin Holland park. 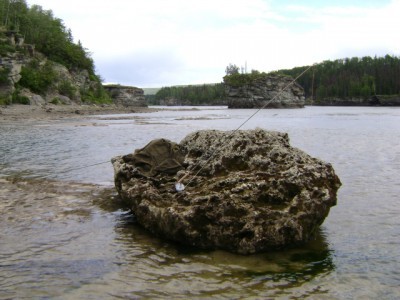 Finally ... something we can fly fish!

I had a fly on called a Pin-Ki (Pink-Killer) designed for rainbow/grayling in Europe (recipe coming soon). First cast grayling.. second cast grayling. That’s probably as many grayling as I’ve caught in the Peace in a couple of years! 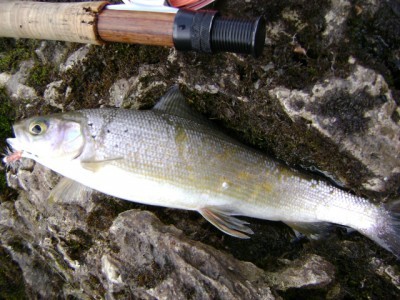 The next couple of hours was a blast as I caught a bunch of grayling, whitefish and rainbows. 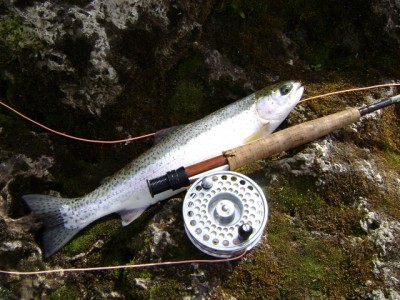 Nothing huge but I did keep a couple of 16 inch rainbows for supper. 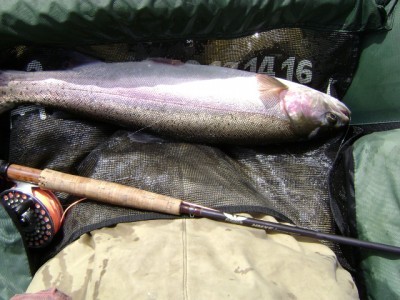 I was thinking to myself maybe I can Grand Slam the Peace. A little later I was bringing in a small grayling when it surfaced about 12 feet in front of me with a Bull hot on it’s tail. I quickly got him in, took a picture of the little guy with some racing stripes teeth marks and released him down river. I grabbed my sink tip/ Double Bunny and started casting. On the 5th cast I was stripping in and as the 6 inch fly rode up on the surface up he came. The Bull rolled on the fly and there was a short tug. I stung him and he was gone, not to be seen again!

You never know …. a planned Grand Slam trip with nothing and then out of no where almost pulled it off on the Peace!