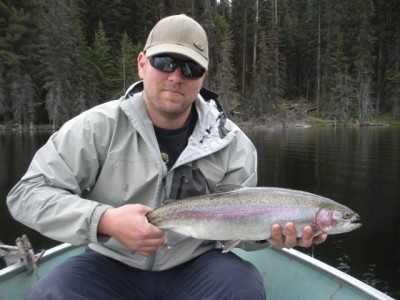 Stu with a gorgeous 5.5 pound bow!

Since the weather was nice today decided to take a good friend out fishing.  He had just bought a new 5 wt TFO rod and reel and wanted to test it out.  This was his 2nd only time fishing the lakes around Kamloops so i was really hoping to get into some good fish and show him a good time.

It started off slow in the morning with one hit but no hook up.  So we decided to change spots on the lake and as soon as we anchored in the 2nd spot, Stu had his first fish of the day on. He then proceeded to hammer 6 more fish in a row and then broke off.  This was the only fly I had of its type and absolutely nothing else in my box was producing.  Damn picky fish.  So after about 45 minutes of nothing, we decided to change lakes.

We got to our new destination at 12:00 noon.  I know this lake having fished it not long ago and it produced a bunch of 2 lb trout on the chironomid with one 4 lber.  I anchored up in the same spot I was fishing the previous time and Stu hooked up right away again with a nice fat 2 lber.  I then casted to the other side of the boat and had a super small hit just barely moving the indicator, so i twitched my hook an about 5 seconds later it did the same thing but this time, hesitating at first, I set the hook and the fish was there.

The fish really didn’t really do anything though, just swam pretty much normally under the boat.  At first I thought it was a little 2 lber but when I tried to lift it up from the bottom, there was no way.  It was like I was hooked on the bottom.  So still thinking I have a smaller one on, I horse it up a little and see a huge flash in the depths.  I new it was big now!

The fish did not want to come up from the bottom, but slowly and gradually I got it up to about 3 feet under the surface and the thing was massive.  It then broke the surface of the water and went CRAZY…thought it was gonna brake off.  After about 5 minutes with the adrenaline pumping, it broke the surface again and went crazy again.  Man, I’m gonna lose it I thought.  Finally it cooperated and gave me an opportunity to lift his head and pull towards the boat.  Stu went forward with the net and in he came. 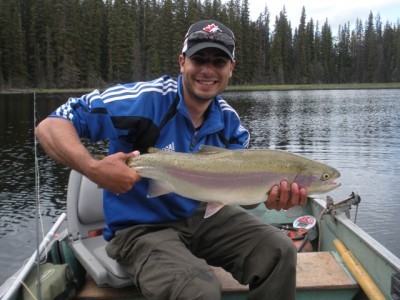 Yahoo! 7.5 lbs, and the fine netting job by Stu paid off shortly because no more than 10 minutes later he landed a 5.5 lber that took him on a nice hard and fast run and fought till the very end, head shakes and all, before almost getting wrapped up in the anchor rope!

All I can say is that this was an awesome day and it couldn’t have been better.