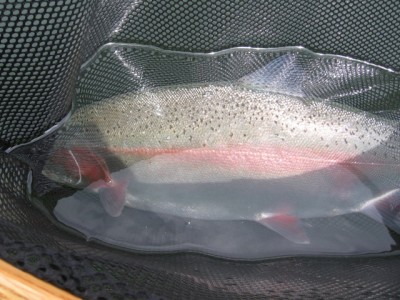 What a great day! My best ever … got a five pound bow at 10:00 am on a micro leech and then after celebrating and enjoying the moment 15 min later I get another bow that I don’t see but rips me out 75 yards and this guy is without a doubt a bigger fish! ……What a rush but as the saying goes they don’t get big for no reason and this one escapes me.

Another spot and two hours later I get this six pounder that is just a beauty…… only allowed one over 50 so back he goes and is still out there for someone else!

Amazing same fly for all three big fish! I was at the lake by 6:00 am and fished until 4pm and prior to today had two days before this day that I did nothing but finally was rewarded.

PS: I just have to chime in here and let everyone know that although this is a gorgeous fish it is not Bob’s biggest of the year as he already pulled a bigger boy out of the same hole a couple weeks back! And since Bob didn’t mention the lake I won’t either but I can tell you that it is one of the many mid elevation Kamloops area lakes that holds  fish this size – so pick one and get out there and try your luck cause you definitely won’t catch one sitting on the couch. 😉

Way to go Bob, persistence pays off and to date this year you’re the top ‘flyguy’! Thanks for sharing your story and the picture!

... flyguys chief webhead, when not fishing ;)
View all posts by BCFlyguys →
This entry was posted in Fishing Reports and tagged BC Lakes Fishing Report, kamloops area lakes, Micro Leech. Bookmark the permalink.