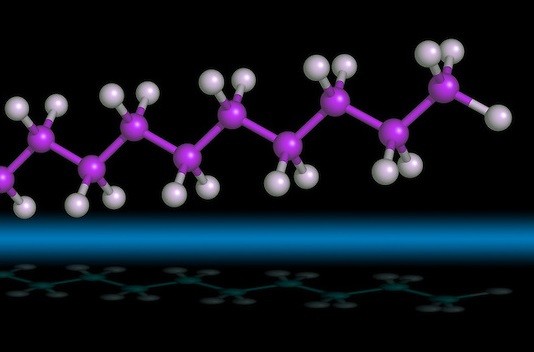 … as originally posted on Active Angling NZ by Alan Bulmer. Thank you Alan for allowing us to share this interesting and informative piece on flyguys.net! 😀

For several years I’ve had a growing feeling that fluorocarbon monofilament simply does not live up to the marketing hype. It is twice as expensive as nylon monofilament but is it twice as good in terms of performance? The short answer is No and this piece will explain why.

Recently I lost a large king fish from the shore after a torrid 20 minute “no holds barred” tussle. Eventually I managed to get the fish into the shallows and under some sort of control, or so I thought. However, in a last ditch bid for freedom it charged off directly away from me in a withering 30 meter burst. This was not ideal at all as I could feel its tail thwacking an angry tattoo on the line. Somehow I managed to turn it parallel to the shore again using side strain and it headed back upstream with fierce resolve. This is when it all turned pear shaped. I felt one treble pull out, followed by a second and then the inevitable happened and the line went slack. It took a moment or two to realize that the fish was gone. What happened next came as a surprise. I despondently reeled in the line only to discover that the trace had actually broken where the tail had rubbed against it rather than the lure come free. The fluorocarbon had ruptured into threads and it was these threads snapping that I’d felt. See the image below. This is a classic fluorocarbon monofilament break and it happens when the line is stretched past its deformation point. Apparently when this happens fluorocarbon loses its strength and ruptures at any surface knick if pressure continues to be applied. Surprisingly none of the manufacturers mention this.

This got me thinking as to how many of the other marketing claims made about fluorocarbon monofilament were correct. It took a few hours but eventually I was able to find four objective articles which evaluated fluorocarbon performance versus nylon monofilament. These were:

These articles look at various brands of fluorocarbon monofilament in detail and I’ve attempted to summarize the key findings in the following paragraphs. If you are looking for a simple table to see which of the claims made are true or false then:-

To start, let’s tackle one of the two worst abused properties of fluorocarbon, that being the claims of “invisible”, “nearly invisible” or “virtually invisible”. This is widely touted based upon a term called refractive index. The refractive index of a material is a dimensionless number that is used to measure how light is transmitted through a material or medium. The numbers that are commonly used in fluorocarbon marketing are shown in the graph below:- 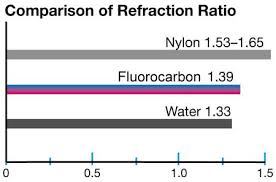 All this means is that the refractive index for fluorocarbon is closer to that of water but it doesn’t necessarily translate into any form of “invisibility” because of it, simply because there are so many other variables involved.

Apparently back in 2001, Jeff Thomson posted a technical article entitled “Mathematical Theory of Fishing Line Visibility” that refuted scientifically any claims as to whether fluorocarbon line was “invisible”.  For some reason the article has since disappeared from the internet but a copy can be found on the Big Indiana Bass hyperlink mentioned above.

Carl McNeil in the Swift Fly Fishing blog link above goes even further and states “While it is true that the refractive light index of fluorocarbon is closer to that of water than nylon (and hence virtually invisible to fish apparently) this common misconception is in my opinion the single biggest load of garbage out there.??Having filmed and photographed fish, leaders and tippets for over 10 years (top side and underwater) I have never been able to see any appreciable difference between the two. ??We’ve looked at tippet material in glasses of water, controlled aquariums and in fresh and saltwater at all sorts of depths and angles. It’s easily seen. My observations have been that both materials appear equally visible against a wide range of backgrounds. And I’m pretty certain my eyes and camera lens are not nearly as well adapted at seeing underwater as those of any fish I’ve observed. ??In short, fish can see tippet, regardless of what material it is constructed from”.

The next commonly made claim made about fluorocarbon is that it is low stretch and that this equates to better hook setting power.

Stretch actually involves two different components namely elasticity and plasticity. For fishing lines, elasticity is typically the ability of a material to immediately return to it’s original length upon release of that load or strain. Elasticity is usually a linear relationship whereby as strain increases the percentage elongation increases proportionately. But many materials after reaching a certain level of strain start to deform to the point of not being able to return to original length once the load or strain is released. That part of the stretch equation is referred to as the plastic phase. Fluorocarbon is elastic up until it reaches the plastic phase (I call this the deformation point) wherein it stays elongated whereas nylon is elastic throughout and returns to its original length when the strain is removed. It may help to imagine nylon as a spring that will return to its original shape when you stop stretching it. Fluorocarbon is like a spring which stays stretched when you pull it too much. Once fluorocarbon is stretched to its deformation point it is weakened forever.

Tackle Tour measure stretch extensively and concluded that there was no difference in stretch between fluorocarbon and nylon. Like nylon, fluorocarbon monofilament can stretch as little as 20% before failure or as much as 30%.

All of the objective tests conducted by Tackle Tour and Big Indiana Bass (BIB) prove that nylon has better knot strength when dry and this is mirrored even after soaking in water. 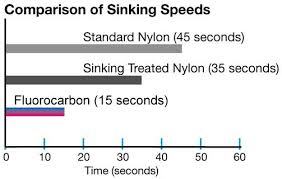 Everyone has probably heard the claim that because fluorocarbon is more dense (1.78) than nylon (1.1) then it will sink faster. While this is true, what you rarely read are the actual sink rates and their subsequent practicality.

According to the BIB article “If you take two pieces of line, one nylon monofilament and one fluorocarbon, sink them in a column of water and time their drop rate, what you’ll find is that it takes the nylon monofilament about 45 seconds to drop 30 centimeters (12?) in the water column. A similar piece of fluorocarbon will make that same 30 centimeter (12?) journey in about 15 seconds, still 3 times faster than nylon but not overly fast in the big scheme of things. If you think of your average cast and retrieve taking somewhere between 30-60 seconds, under its own accord the fluorocarbon will have only had the chance to move 60 – 120 centimeters (24? – 48?) down into the water column in that time period. So for things like shallow running crank baits, jerk baits and spinner baits, fluorocarbon would work well. For top waters, it pretty much sucks as it wants to slowly pull your bait down into the water which is not what you want with a floating top water. For all other baits like worms, jigs or other things typically fished deep or on the bottom, it probably helps a little, just not as much as you might have thought”.

Carl McNeil states “Cast out flat and relatively straight fluorocarbon usually does not fully break the waters surface tension. If pulled under by the weight of a fly, it will sink albeit very slowly, but not to have any appreciable effect on the sink rate of the fly. A fluorocarbon leader does not “pull” a weighted fly down into the water column by any appreciable measure. My observations are that both nylon and fluorocarbon leaders will sink if they break the surface tension. Both can be treated with a floatant or a sinking agent such as a fullers earth mixture to affect the desired result”.

One of the real benefits of fluorocarbon comes in the form of resistance to water absorption. Depending on the exact makeup of a particular nylon monofilament, it would not be unusual to have between 3-10% absorption of water (by weight). That leads to both good properties and bad. On the good side, a nylon monofilament that absorbs water swells slightly, becomes easier to handle, becomes more limp, makes knot tying easier and will even cast better. On the negative side though is that water absorption weakens the line, increases stretch and decreases strength. So depending on your perspective this may or may not be a positive.

Fluorocarbon though is practically impervious to water. Water absorption rates are typically <0.04% for pure fluorocarbon. What this means is that none of its physical properties change after a good soaking. Line strength stays the same, stretch stays the same, but so too does any stiffness or unruliness. Again, a mixed bag depending upon how you look at it.

The increased thickness of fluorocarbon for an equivalent breaking strain is also a negative as in theory the thicker line is more visible to the fish and Dr Mike Ladle also postulated that it may be more easily detected by the lateral line.

If you are looking for a thinner tippet that will allow a fly to be behave more naturally on the water, particularly important for small dries and emergers where that elusive drag free drift is all important, the nylon monofilament is a better choice. 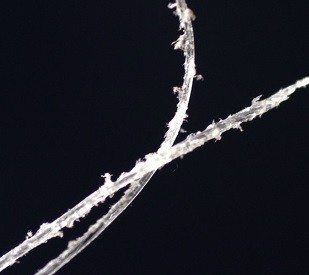 The Tackle Tour tests confirmed that fluorocarbon had better abrasion resistance than Trilene XL nylon. However, they never tested fluorocarbon against “hard” nylon or coated nylon. According to McNeil “hard nylon monofilament and modern annealed and coated nylon products offer abrasion resistance on par with fluorocarbon and with the most desirable superior knot and tensile strengths – and are a third of the cost. My advice to most trout anglers, and particularly those starting out is to save a few bucks and go for a good quality nylon material over fluorocarbon”.

One of the weaknesses of nylon monofilament is it’s instability when exposed to sunlight, in particular ultraviolet radiation. Tests show that the loss can be as great as 20% of its strength in the first 100 hours of exposure. After that, nylon can lose another 20% over the next 100-200 hours. This degradation is usually in the form of oxidation. However, 100-300 hours of exposure is a long time and it is only the line on the surface of your reels and strung through your guides is directly exposed to the UV and subsequently getting the exposure. If you are constantly cutting off end sections and retying, then it is unlikely to be an major issue.

Fluorocarbon on the other hand is largely transparent to UV radiation and therefore suffers much lower UV absorption. As such, the material will not be degraded by sunlight. So score one positive for fluorocarbon. 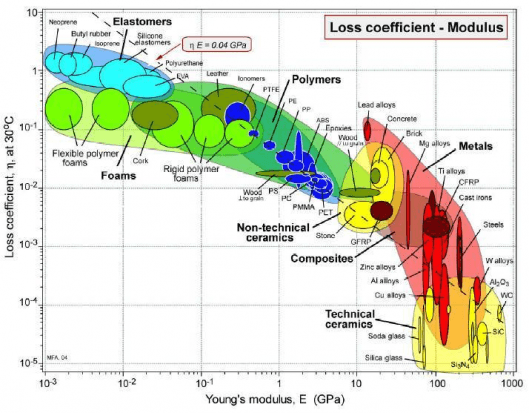 However, remember that nylon absorbs water whereas fluorocarbon does not. Water has a plasticizing effect that decreases stiffness (modulus) but increases flexibility. Even a few tenths of a percent of water absorption by nylon can decrease significantly the modulus value of nylon compared to its dry state reading. How much? Depending on the specific formulation, as much as a 30-40% loss in axial elastic modulus and, therefore, stiffness.

Taking into account all of the above, it seems to me that fluorocarbon is over hyped and that the benefits gained from using it do not justify the huge price premium.