After some time discussing the “church window” effect with retired fisheries biologist/local Kamloops fly fishing enthusiast Richard Bailey, he has graciously taken the time to share a write up on the what it is, the why it’s important,  and the how he has implemented it into the chrironomid pupae tying process.

Richard has been fly fishing for over 50 years, and has lived in Kamloops since 1998. Early is his schooling around the interior lakes, a frustrating day anchored up beside the late Barney Rushton resulted in a 43:1 drubbing. It was at that moment that he decided he had to learn about those Chironomids! That day in the early 80’s started a significant pursuit of knowledge, and being a biologist who’s work frequently included studies of fish behavior, it was natural that science would be central to the studies. Early on, those studies included much mentoring from senior scientist colleagues, and guidance to look at certain aspects of what may trigger trout interest in feeding, plus a deep dive into the biology of the chironomids themselves. Fast forward through 35(ish) years of devout chironomid religion and let’s talk church windows … 🙂 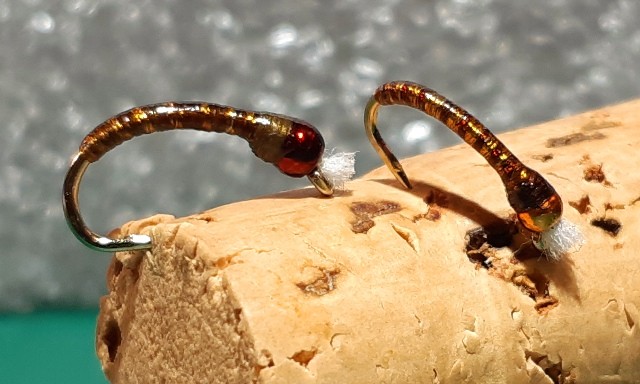 That Chironomid Religion: Staring at the soon to emerge adult midge through the stained glass of the “church window”; Trying to get our flies to mimic what the trout sees….. 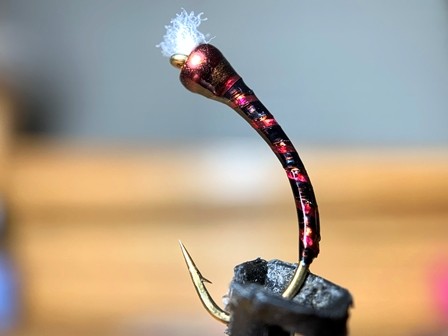 Around 15 years ago, I was fishing Horse Lake in the springtime, during a significant hatch of black chironomids. The thread body and wire rib patterns we had tied were obviously inadequate: The trout and Kokanee effectively ignored them for most of the morning. Mercifully, a few Callibaetis mays started to emerge later in the morning, and I quickly swapped out the unsuccessful pupa pattern and put on a may nymph. Bingo, and following the instant success, I took a pump sample and retreated to the cabin for lunch. In the vial, which I placed on the cabin windowsill, the pupae wriggled. As I watched them, several things became apparent, but mostly that there was gas inside the shuck and that it wasn’t mirror-like but that it was more and less apparent in each segment as the pupae wriggled. Additionally, I could see through the pupal skin in some portions of the segment to see the grey-black adult midge contained within. At that moment, I realized that the gas, the transparency of the shuck and associated factors were likely some of the triggers that are important to trout during a chironomid emergence. Using white superfloss stretched tight as a rib over the black thread, and a secondary rib of burgundy wire, and all lacquered with Krazy Glue, I created the first of the patterns to imitate what I saw. We took those flies back out onto the lake and the results were beyond stupid; cast, count to 10 and set the hook!

Since that time, I have come to realize that the colours that we see in emerging chironomid pupae are primarily influenced by the colour of the chironomid shuck. Shucks come in various degrees of opacity (how opaque they are) and in different shades of grey, and brown, and likely more. I certainly realize that there are other folks who have seen way more than I……… Once you realize that our view of the pupa is governed by the colour and opacity of the shuck, it’s pretty easy to see where the Church Window theory comes from: We stare at the contents of the pupa through the stained glass that is the pupal shuck, and that stained glass analogy reminded me of the church windows of my youth.

Thus, That Chironomid Religion: Staring at the soon to emerge adult midge through the stained glass of the “church window”; Trying to get our flies to mimic what the trout sees … because if our flies provide that illusion to the trout, odds are that they will take the fly.

To explain the concept in more detail, try to consider the following: Chironomid pupae, on their migration from the bottom of the shoal to the surface are merely an escape pod that carries the almost fully developed adult midge from the muddy bottom of the lake to the surface, where the escape pod splits, liberating the new midge to the world above the waters. Our quarry the trout, often focus their attention on this phase of the chironomid’s life history and can become exceptionally selective when dining on pupae. 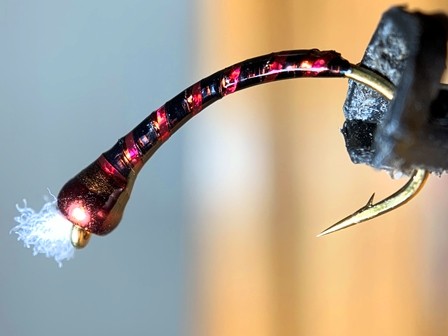 The pupae, as they leave the bottom, secrete gas into the pupal shuck. The gas has two functions: providing buoyancy to assist the pupa in rising to the surface and separating the pupal shuck from its passenger (the adult midge) contained within. Pupal shucks vary in transparency and colour and tend to be somewhat opaque and either clear, shades of grey (no I don’t know how many shades of grey!), shades of browns and shades of olive. Why is this important?

As the pupa rises toward the surface with its cargo inside, the cargo becomes more and more separated from the pupal shuck, and those areas of separation (clearer shinier segments) appear increasingly reflective due to the expanding gas bubble inside. Some appear mirror-like when the pupal shuck is very transparent and almost colourless. Those pupae are the ones we imitate with Chromies. Others have a golden glow when the pupal shuck has a summer duck bronze hue to it and still others glow with a coppery tone if the shuck is reddish-brown. In every case, the gas itself is the same colour, but it (the gas) is viewed through the lens of the pupal shuck, just like looking at the world through the stained glass of a church window.

Imitating that partial transparency, partial reflectiveness of the pupal shuck closer to the bottom is the game for the chironomid fisher during a hatch. As the chironomid pupa wriggles, different views of the gas and the cargo inside are visible to the fish due to the partial transparency of the shuck. For this reason, partly transparent, partly reflective films that mimic the colour of the pupal shuck provide us a leg up on imitating migrating pupae. Anti-static bag (ASB) strips were a major step forward in that they provided a more grey, duller reflection than silver tinsels and flashabou. However, ASB is not very transparent, and seems to be only available in grey tones, although I haven’t tried to dye it (yet). That said, there is no denying the effectiveness of ASB in some chironomid pupa patterns. Window tinting film strips are the next step forward. These thin films provide both a degree of reflection and a greater degree of transparency (than ASB), providing the semblance of the early gas bubble as it starts to expand, without being overly reflective like many tinsels. Remember, the majority of the feeding typically happens near the bottom (6”-2’ off) and the gas in the pupal shuck has not really expanded much by that stage in the journey to the surface, unlike when you examine the pupae from a pump sample (at the surface), without the pressure of 10 or 15 feet of water above them. 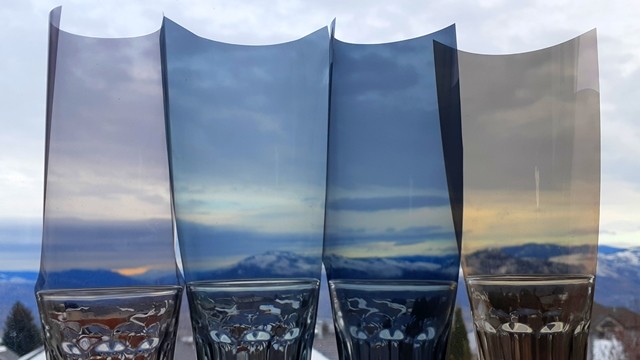 Window films are available in more colours than ASB, and most importantly, they are available in different shades and degrees of transparency as well. Using thin strips of window film as ribbing material (~50:50) and then lacquering the pattern with a cyanoacrylate glue (Krazy Glue or Zap a Gap) will allow the glues to penetrate under the film strips and produce a durable semi-transparent, semi-reflective pupa pattern, that when moved gently, provides those different views, just like the naturals. Using different colours of thread to form the bodies, and films that mimic the colour and transparency of the pupal shucks opens up new ways of seeing the world, through the church window.

So there you have it folks. The congregation has come a long way in the evolution of the hallowed chironomid pupae fly, but it seems that we (OK Richard 😉 ) may have elevated it to a whole new level with the church window concept. Let us pray …

*** for more, proven effective BC stillwater fly fishing patterns be sure to check out all of flies on our BCs best fly patterns index page!

*** if you’re interested in custom tied, time tested & proven effective BC Interior fly patterns but would rather buy em than tie em, please check out store!