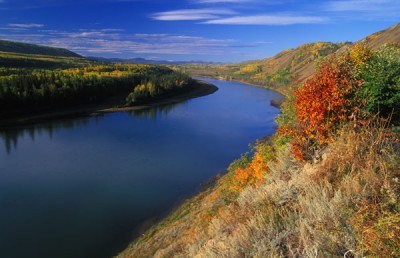 For what it’s worth, my letter to the Canadian Environmental Assessment Agency regarding the Site C BC Hydro Dam project on BC’s Peace River …

Let me lead off with I don’t really believe this will get read or have any bearing to what appears to be a direct path to Site ‘C’. This is evident with only a one month window on such a complex issue and the fact that both the Federal and Provincial separate reviews are being lumped together as one. Having said that I wouldn’t feel good about not voicing my concerns.

My #1 concern is with the Bulltrout which, as you point out on your website, are not on the federal Species at Risk list. They are, however, still a Species of Special Concern. At the present the Bulltrout (some of the largest river Bulltrout in North America) spawn in the Halfway and its tributaries then fall back into the Peace River. Once in the Peace they primarily live off the abundant Whitefish population. The reason there are so many fish in the Peace is it’s freestone make-up with a huge biomass of midges, stoneflys, caddis and mayflies. Other then midges the rest will disappear in the lake. With all the sloughing banks and settling solids from the Halfway spring run-off this lake will be a large, cold muddy dugout. It will only be a matter of time before the Whitefish population crashes taking the Bulltrout with it.

This, also, is the last section of foothills Peace River with its unique Peace River Rainbow trout. At present below Taylor the species of fish change from the Bulls, Rainbows and Grayling to Walleye, Goldeye and course fish. It’s been documented that the Bennett Dam highly reduced the nutrient load of the Peace and this had impacts as far as the Arctic delta and it’s bird and plant life. Site C will effectively eliminate the last big nutrient dump into the Peace adding to the impact.

I never could get an answer to my questions regarding how long before the public would be allowed onto this reservoir. My guess because of slides and sloughing conditions it will be more than a decade. Also Hydro danced all around my question of the consequences of a major slide like the Halfway slide into a full reservoir.

Well there’s my two cents though we all know that money trumps environment just about every time. I don’t buy Hydro’s logic that B.C. needs the power. More likely it’s for the U.S. and Alberta Tar sands. The same U.S. that owes us how much money for past electricity and if Alberta needs power let them build their nuclear reactor.

Fly fishing the great white north! I mainly fish the lakes, rivers and streams of North Eastern B.C. for Rainbows, Lakers, Brookies, Bulltrout and Grayling.
View all posts by Gord →
This entry was posted in Fishing and tagged BC Hydro, Dam Prjoect, Peace River, Site C. Bookmark the permalink.

2 Responses to Keeping the Peace – Dammit!